Cristiano Ronaldo of Real Madrid looks on during a training session ahead of the UEFA Super Cup at Cardiff City Stadium on Aug. 11, 2014 in Cardiff, Wales.
Chris Brunskill—Getty Images
By Megan Gibson

What spread across the U.S. like wildfire has now gone global, as actors and sports figures in Europe have taken up the ALS Ice Bucket Challenge.

The challenge, which is likely clogging up your Facebook feed right now, began as a way to raise awareness for Amyotrophic lateral sclerosis (ALS), often referred to as Lou Gehrig’s disease. People have been challenging their friends and relatives to either dump a bucket of ice water over their head or donate $100 to an ALS-related charity. As the videos have gone viral — and millions of dollars have been donated to ALS research — it wasn’t surprising that celebrities quickly got involved.

Real Madrid soccer player Cristiano Ronaldo is one of the latest celebrities to take up the viral video challenge after being nominated by Manchester United player Darren Fletcher. A shirtless Ronaldo then nominated Beyonce, Jennifer Lopez and Lil Wayne.

But he’s just the latest high-profile figure outside the U.S. to embrace the challenge. British comedy star Ricky Gervais was nominated by former Extras co-star Ben Stiller, according to his video, and he in turn nominated Andy Murray and Russell Crowe.

And, of course, it wouldn’t be a craze if morning TV presenters didn’t get in on the action. TV presenters Susanna Reid and Ben Shephard opted to get doused live on Good Morning Britain on Monday.

One European who hasn’t taken part yet is Victoria Beckham, despite being nominated by her friend Eva Longoria. Somehow we can’t quite see the always-impeccably-made-up Posh Spice willingly dousing herself with ice cold water, so perhaps she’ll add to the over $10 million raised by the craze so far.

So far, more than 1.2 million people have shared their own ALS Ice Bucket videos on Facebook, proving that this challenge has taken on a life of its own. 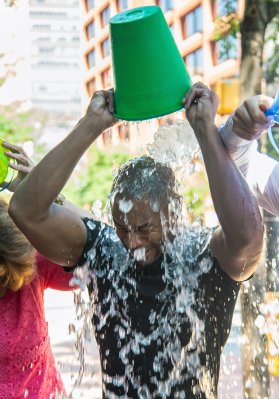 This Is How Many Ice Bucket Challenge Videos People Have Posted on Facebook
Next Up: Editor's Pick