A protestor holds a sign that reads "stop killing us" amid clouds of tear gas in Ferguson, Mo. on Aug. 17, 2014.
Jon Lowenstein—Noor for TIME
By Alex Altman/Ferguson, Mo. and Robert Klemko/Ferguson, Mo.

Violence erupted once again in the troubled city of Ferguson, Mo., as multiple gunshots were fired and police launched dozens of tear gas canisters and a main thoroughfare became a battle zone. At least two people suffered gunshot wounds. Several others were arrested, and the violent night ended with Missouri Gov. Jay Nixon deploying the National Guard to Ferguson.

The city’s school district said all schools would be closed Monday, “due to continuing unrest in some areas of Ferguson, and in the interest of the safety of students and families.”

It was the second night of a state-imposed midnight curfew designed to quell the unrest that has enveloped this St. Louis suburb since Aug. 9, when Michael Brown, a black teenager, was shot to death by Darren Wilson, a white police officer. But trouble flared hours before the deadline Sunday.

By around 8 p.m., groups of teenagers began fighting near a convenience store that has been a gathering point during the week-long protests. Witnesses reported seeing guns, and people began sprinting away from the area. Multiple peaceful demonstrators told TIME that the perpetrators were rival gang members who were not part of the protests.

At 8:25, police received reports of a shooting on West Florissant Ave., according to Missouri State Highway Patrol Captain Ron Johnson, the head of the police response. A minute later, shots were fired down the street. Two minutes after that, reports came in of multiple people with guns.

As police began gathering tactical equipment, a crowd of about 300 protesters began a planned march toward the staging area police have set up in a shopping center about a half-mile south. As the crowd approached, police in three armored vehicles sped toward them, stopping about 10 feet away.

“Disperse immediately,” an officer in the lead vehicle announced.

When none in the crowd did, police launched about a dozen tear gas canisters, sending the bulk of the protesters back down Florissant Ave. or ducking into nearby neighborhoods. Several stragglers were arrested at the scene.

Police said the incident caused them to launch the tactical operations. The result was complete disorder, as officers in armored trucks, gas masks and riot gear drove up and down the street, using tear gas and flash grenades in an attempt to disperse the crowd. A McDonald’s was overrun, Johnson said, forcing employees to lock themselves in a storage room. Police were shot at, and targeted with Molotov cocktails and bottles, in what Johnson called “preplanned criminal acts.” Multiple businesses were looted.

The total number of injuries to members of the crowd was not available, but no officers were injured. 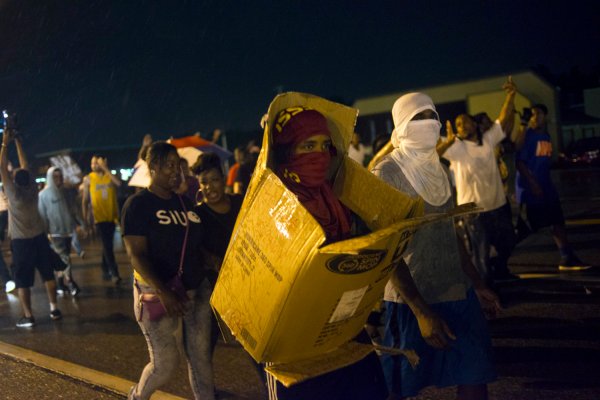 'If You're Scared, Go Home': Countdown to Curfew on the Streets of Ferguson
Next Up: Editor's Pick