Protestors look on during a peaceful demonstration on Florissant Ave. in Ferguson, Mo. on Aug. 16, 2014.
Jon Lowenstein—Noor for TIME
By Alex Altman/Ferguson, Mo.

Some of them arrive not long after daybreak, bagging trash and sweeping broken glass and spent casings from streets bearing scars of the previous night’s battles. Others arrive toting crates of bottled water and burgers to hand out to their neighbors, or grill hot dogs for police in a gesture of peace. Still others bring young children, who scrawl hopeful messages on the sidewalks outside a torched store in brightly colored chalk.

Most of the residents of Ferguson, Mo., have been trying, in ways big and small, to advance two conflicting goals over the last nine days. One is the momentum of their protests over the shooting of an unarmed teenager, Michael Brown, on Aug. 9. The other is good public order. And if the outside world has seen the unrest in Ferguson as a stand-off between militarized police and occasionally violent protesters, many of Ferguson’s residents see themselves caught between the competing injustice of those two forces.

The job for Ferguson’s peaceful residents got harder overnight Sunday, as violence once again broke out after dark, punctuating a week marked by mayhem. At least two people were shot. Brawls broke out between what locals said were rival gang members toting guns. Shortly after, a protest march toward a police command center led officers to hurl tear gas, kicking off a frenzied scene. People hurled Molotov cocktails, shot at police and looted businesses.

There is no doubt that some of the people gathering on the streets of Ferguson are looking for confrontation. But the vast majority of the hundreds of protesters who have massed all week have been boisterous but peaceful. Dozens interviewed said they were voicing fury over what they believe is a long-standing pattern of police intimidation, profiling and brutality in a community that is two-thirds black but run by white cops and white politicians. The cops in riot gear and armored trucks this week merely extend a pattern of racial profiling, marked by slurs and random traffic stops over the years, these residents say. “You sort of get numb to it,” says Laroyce Mills, a demonstrator from nearby Jennings.

A recent report substantiates the claim that blacks are targeted more often by a Ferguson police department that is more than 90% white. The 2013 report by the office of the Attorney General of Missouri, found a pattern of racial profiling in Ferguson: blacks are far more likely to be stopped than whites; cops are nearly twice as likely to search blacks than others when they stop them; and they are a third less likely to find contraband when they do.

The violence that has overtaken the peaceful protests is just as frustrating to many in Ferguson. Much of it has been caused by people who gather under the pretext of Michael Brown’s death, then exploit the unrest as an opportunity to create mayhem.

“These people are not protestors. This is something different and it has little to do with #JusticeForMikeBrown,” tweeted Antonio French, a St. Louis alderman and community leader who has emerged as an important mediator. French and others believe the provocateurs are doing damage to a heartfelt cause. The images of looting and rioting threaten to rob Ferguson’s peaceful majority of political sympathy. They may stoke racial tensions even further, undercutting the message of the protests.

The peaceful majority are trying to assert control. On Friday night, as looters ransacked and set fire to businesses, groups of locals gathered in a line in front of shops to stand watch and prevent further destruction. On Saturday, in the tense hours preceding more post-midnight clashes, there were more people working the crowd and urging it to keep the peace than bad actors who ultimately helped shatter it. In interviews, many residents suggested the rioters were largely out-of-town troublemakers—from East St. Louis, or maybe Chicago; no one really knew—who jumped at the chance to confront police.

“There are a small percentage of people who are being inflammatory, and that’s not what we’re about,” says Paul Muhammad of nearby Florissant, Mo., who wore a black t-shirt advertising his unofficial “Peacekeepers” group, which worked the crowd Saturday night urging young demonstrators to heed the state-imposed curfew.

With about an hour before that curfew, a cluster of men huddled in a strategy session in a McDonald’s parking lot, debating the best way to disperse protesters. They knew part of the crowd was bent on confrontation. But they wanted to reach some of the angry young men who were convinced that to obey a curfew would be to negate the purpose of the protests.

People like Mark Lollis, 29, a student from Nashville, Tenn., who drove to Ferguson with friends to join the protests. The clashes are “an extreme action for an extreme action,” he told TIME. Later, he was reportedly one of many demonstrators to confront and shout at police.

The response to Brown’s shooting has drawn people from all walks of life to West Florissant Avenue, from the monks who gathered at the scorched QuikTrip convenience mart to political figures like Jesse Jackson to professionals for whom the gritty thoroughfare offers a stark juxtaposition from their everyday world.

One of them was Byron Strong, Sr., a black financial adviser who grew up in the area but has left it behind for a more prosperous suburb. “I’m in a coat and tie every day, so I’m not the kind of guy the cops tend to pull over,” Strong says. Saturday was his first night at the demonstrations, and he confided that he didn’t especially want to come. But there he was, standing under a gas-pump overhang for shelter from the driving rain, next to his teenage son, Byron Jr., a high-school football player with a build similar to Mike Brown. 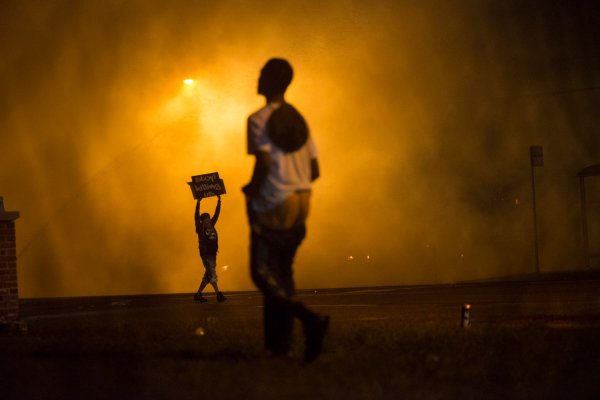