'If You're Scared, Go Home': Countdown to Curfew on the Streets of Ferguson

Governor Jay Nixon set the curfew to begin at midnight. After that, all people out on the streets of Ferguson, Missouri—whether looting, peacefully protesting, or otherwise—would be breaking the law.

TIME stayed on the streets of the St Louis suburb Saturday night, filming locals as they debated whether to go home—as the police urged them to—or to stay and resist the will of the authorities. Throughout the day, legal advocates passed out instructions in case of mass arrest, and community leaders tried to urge protesters to obey the curfew.

But to some present, remaining on the streets after the moratorium fell took on a greater symbolic meaning than simply protesting the death of Mike Brown, the black teenager shot by police a week earlier. It was about not being told what to do; about resisting the might of the state.

Starting at 8:30 p.m. self-appointed ‘peacekeepers’ who wanted to avoid confrontation stopped trying to convince others to follow the curfew, and began filtering out. The vast majority of demonstrators did the same, leaving the streets to small bands of protestors determined not to give in to the demands of law enforcement officials.

At midnight the police began to ready themselves. At 12:30 the confrontation began. 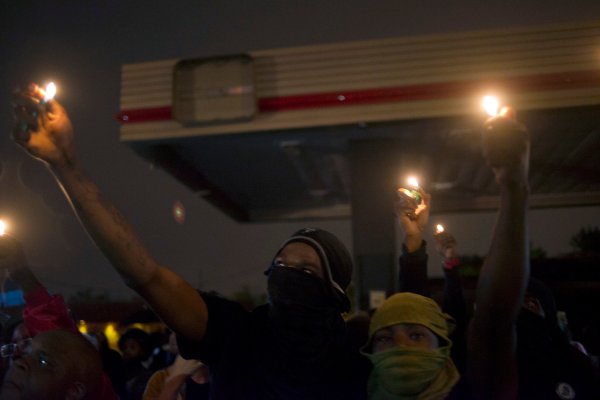 'If You're Scared, Go Home'
Next Up: Editor's Pick