A curfew will be enforced for a second night in Ferguson, Mo. Sunday, a day after Governor Jay Nixon declared a state of emergency over some protestors’ clashes with police over the killing of 18-year-old Michael Brown.

Missouri Highway Patrol spokesman Al Nothum said the midnight-to-5 a.m. curfew had been extended to a second night, the St. Louis Post-Dispatch reports. One man was shot and seven people were arrested the first night, as pockets of protestors attempted to defy the order.

On Sunday the Justice Department also announced it would be conducting its own autopsy of Brown, who was shot and killed by police on Aug. 9. “Due to the extraordinary circumstances involved in this case and at the request of the Brown family, Attorney General Holder has instructed Justice Department officials to arrange for an additional autopsy to be performed by a federal medical examiner,” department spokesman Brian Fallon said in a statement.

The attorney of the family of the 18-year-old told TIME Saturday that lawyers for the family had hired a independent forensic pathologist to conduct an independent autopsy. The office of the St. Louis County Medical Examiner said the teen died of gunshot wounds in its original examination but had not specified how many times Brown had been shot. Fallon said the results of the state-performed autopsy would be taken into account by the DOJ.

Brown was killed after an encounter with a police officer, recently identified as Darren Wilson, who police say was responding to a “strong-arm robbery.” Local authorities have said that Brown was shot in a struggle for the officer’s gun and had matched a description of a suspect who allegedly stole $50 worth of cigars from a convenience store.

But at least one witness disputes that account; CNN reports that some witnesses say Brown was in a surrender position when he was shot, which has led many Ferguson residents claim the killing was yet another instance of racial profiling and police brutality.

Nixon, appearing on CBS’ Face the Nation, said Sunday that police tried to “besmirch” Brown by releasing documents and video footage alleging his participation in the robbery before his death.

“I mean, when you release picture and you clearly are attempting to besmirch a victim of a shooting, shot down in his own street, a young man and at the same time you’re releasing information to try to make it, to tarnish him, then properly, there was a lot of folks that were concerned about that, and I do think it flamed it back up and has caused us to have to deal with some of that,” Nixon said, Politico reports.

CNN reported Saturday that the video was released over the objections of the Department of Justice, which worried it might enflame racial tensions. 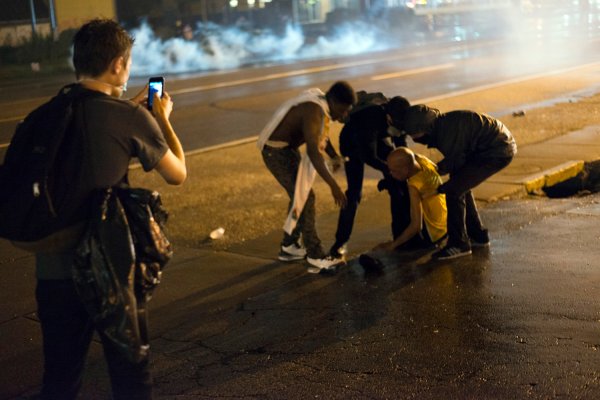 Curfew Gives Way to Chaos
Next Up: Editor's Pick