Protestors help a man who was injured by tear gas thrown by police after refusing to disperse after the midnight curfew in Ferguson, Mo. on Aug. 17, 2014.
Jon Lowenstein—Noor for TIME
By Alex Altman/Ferguson, Mo.

Violence flared again overnight in Ferguson, Mo., as a state-imposed midnight curfew drew protests and then running clashes between dozens of people and heavily armed police. The skirmishes left one man in critical condition with a gunshot wound and seven others arrested.

In a lengthy standoff that stretched deep into the early morning hours, police hurled smoke bombs and tear gas at protesters who defied calls from community leaders to comply with the curfew and occupied a main thoroughfare in this St. Louis suburb. Ferguson has seen sustained demonstrations in the week since Michael Brown, a young resident, was shot to death by a Ferguson police officer.

The gunshot wound victim was transported to a nearby hospital in critical condition, said Ron Johnson, the Missouri State Highway Patrol Captain presiding over the operation. The seven people arrested were charged with “failure to disperse,” he said.

The confrontation began shortly after 12:30 a.m. on Sunday morning, just hours after Missouri Governor Jay Nixon declared a state of emergency and imposed a midnight-to-5 a.m. local curfew in an effort to curb the chaos that has roiled Ferguson in the wake of Brown’s death.

Advancing in riot gear, with gas-mask clad officers and armored tanks, police attempted to disperse the small crowd as a defensive measure, Johnson said. Police received reports that armed protesters had holed up in a barbecue joint on West Florissant Avenue, the business strip that has hosted rolling protests, including multiple nights of looting, Johnson said.

In addition, Johnson said police received intelligence that at least one person had climbed onto the roof of the restaurant, while another brandished a handgun in the middle of the road. Some also hurled bottles.

Fearing for the safety of officers, Johnson said, police deployed smoke canisters and tear gas to clear the street before and during their advance. Plumes of smoke wafted into the air, stinging the nostrils and eyes of reporters huddled off the street, between the protesters and police.

A police patrol car was fired upon during the standoff, Johnson said, but no officers were injured and it is unclear whether the vehicle was struck. Multiple gunshots were exchanged during the roughly two-hour operation, though it was not immediately clear who had fired them.

The deployment of tactical weaponry was “not related to the enforcement of the curfew,” Johnson told reporters in a 3 a.m. news conference at the police operational command center in a nearby shopping strip. The response to the threat was “proper,” he said, but added: “I was disappointed.”

Many members of the community tried to prevent the blowup, which was the latest setback for a town trying to move beyond unrest. The vast majority of the crowd, hundreds strong, that initially gathered were peaceful. As on Friday, the clashes were caused by a small faction who had vowed all day to defy the curfew. As the clock ticked toward midnight and the specter of mass arrests and violence loomed, a tense and frenzied scene unfolded.

Police quietly stood sentry in front of the thoroughfare’s shops. Pastors and community leaders huddled in the parking lot of a McDonald’s, debating the most effective way to convince peaceful demonstrators that the wisest course of action was to obey the curfew and return the next day. A state senator with a megaphone loudly urged the crowd to scatter. Legal advocates passed out sheets of paper containing instructions and contact information in the event of mass arrests. People arranged several cars into a makeshift barricade in the middle of the street in an attempt to block a small, restive group from advancing on the police line several hundred yards away.

“We have to regulate ourselves, police ourselves,” said Paul Muhammed, one of several community leaders who appointed themselves unofficial “Peacekeepers,” wearing black T-shirts bearing the word and urging compliance with the governor’s order.

Whether it was the community push or the drenching rain, the crowd thinned considerably as it approached midnight. In the end, only about several dozen protesters stayed to defy the curfew, including an aggressive cluster of young men that many community members said were out-of-town troublemakers.

But those who remained were intent on squaring off against a police force. Some of them expressed outrage at the handling of the Brown case by police. Ferguson residents have accused the local police of racial profiling, bullying and brutality and have been incensed by the lack of charges brought against Darren Wilson, the Ferguson cop who shot Brown to death last Saturday. At one point, about an hour before curfew, a furious protester with a bandana covering his mouth accosted Johnson, demanding to know why Wilson had not been brought up on charges. “I need an answer, sir!” he screamed.

It became clear that a standoff was inevitable, with the remaining protesters convinced that heeding the order would be a sign of capitulation. “They armed. We armed,” shouted one member of a group massed near the burned-out convenience store that has become a de facto town square over the past week. “Let’s do this.”

Reverend Cleo Willis, one of many community leaders who spent hours imploring protesters to obey the curfew and disperse, was in the thick of the crowd when officers began advancing. Just before the first smoke bombs were launched, Willis said he watched several young men strip off their shirts and lie down in the middle of the street to await the advancing police line. “We’re ready to die,” one said, according to Willis.

“I’m staying here because this is bigger than me,” said Markis Thompson, 26, of Ferguson. “I’m sacrificing myself for the cause.” 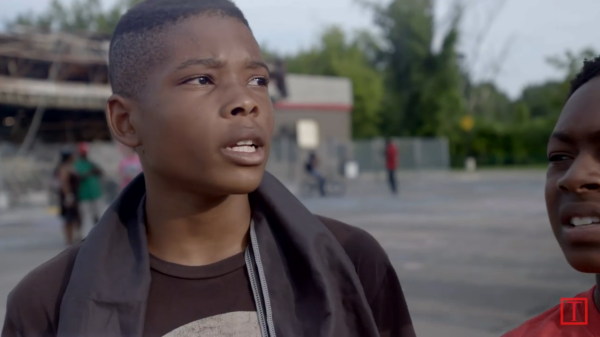 Ferguson's Protests Seen Through the Eyes of a Teenager
Next Up: Editor's Pick