The Associated Press declared a winner at 2:30 a.m. ET on Saturday, which was about 8:30 p.m. local time; polls closed at 7p.m. The Hawaii office of elections reported a close race, with Schatz beating Hanabusa by only 1,769 votes. Schatz outspent Hanabusa by $1.5 million, according to the Center for Responsive Politics, and secured the support of both President Obama and the Democrats’ progressive faction, including Sen. Elizabeth Warren (D-Mass.)

“This was obviously an extremely hard-fought race. But we’re gratified that the voters heard our message and recognized that I’ve been working hard for the people of Hawaii,” Schatz told the Associated Press on Friday.

Schatz’s win brings one of the nation’s most tense Senate primary races to a close nearly one week after the official primary election was held. Voters in the district of Puna on Hawaii’s Big Island who were prevented from casting ballots due to damage from a tropical storm were the deciding factor in the Senate race and both candidates focused their attention on the residents throughout the week.

In an interview with a local news station following the election, Rep. Colleen Hanabusa said she thought the influence of mainland groups had a huge impact on this election.

“When you have a lot of mainland interest coming in and they can pour in a lot of money—I think that did make a difference in this election,” Hanabusa told KHON2 News. But, she added, “the people still voted they way they wanted to vote.”

Hanabusa did not say whether she would challenge the results, which she said has been requested due to the election’s low turnout. Residents of Puna are still reeling from Tropical Storm Iselle—according to Hawaii Electric Light, some 3,800 customers are still without power.

The win also essentially secures the incumbent’s seat in Senate—a Republican hasn’t been elected to the Senate from Hawaii since 1970. 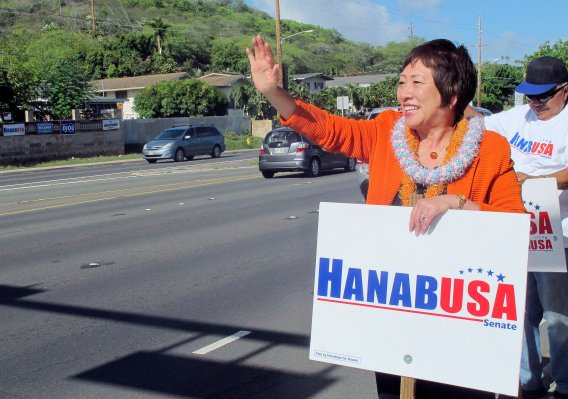 Storm-Struck Hawaiians to Decide Senate Primary
Next Up: Editor's Pick