Isata, a 22-month-old, is the youngest patient to be discharged from the Ebola treatment centre in Kailahun district, Sierra Leone on Aug. 6, 2014.
Jennifer Yang—Toronto Star/Getty Images
By Stephen T. Fomba

Growing up in the village of Konjo in the Eastern Province of Sierra Leone, I remember the walks. After waking up to the crowing of hens, I’d take long, cold morning walks to the farms to chase away birds from our little crops and work for as many as 12 hours. I’d walk barefoot to and from school. I’d carry our chickens in a cage with a rope tied to it and hung around my head so that the cage rests on my back while my head held the weight.

I didn’t mind growing up this way, for I didn’t mind work and did not know what I did not have. But I hated having to make these walks barefoot because we could not afford shoes. The injuries were too much. I sustained burns from the hot ground and rocks; wounds from sharp stones, thorns, and even broken bottles; infections from unknown bacteria, and various ailments—red skins, open sores that took very long to hear, fevers. Even when hurt or ill, I had to keep walking, often as many as 20 miles a day, usually under a hot sun.

My concern is personal. My hometown is in the area that has been hardest hit by the Ebola virus. (I am in contact with my family but have not been back to visit since 2007). And the Kissi people (my tribe) are the majority in the places in all three countries where Ebola has broken out: the Kissi Chiefdoms in Kailahun, Sierra Leone; Gueckedou, Guinea; and Lofa County, Liberia. Are barefoot walkers, I wondered, coming in contact with Ebola-positive body fluids on the grounds they tread upon? People are always spitting out saliva. If an Ebola-positive person walks around barefoot, steps on a sharp object, and bleeds, he or she would easily spread the virus. And if an Ebola-negative barefoot walker steps on an Ebola-positive saliva or blood, that barefoot walker would unknowingly become infected. I’m not sure how much barefoot walking is contributing to the spread of the virus right now, but a virologist confirmed my hypothesis.

We rarely think about the perils of walking barefoot. But according to one widely cited estimate, some 300 million children on Earth don’t have shoes. Many illnesses and infections come from the ground, through stepping on sharp objects, or touching saliva, blood or bodily fluids. And it’s not merely those who can’t afford shoes who have to go barefoot; many millions of people around the world own poor quality shoes, but have to be careful not to overuse them to avoid early wear and tear. Shoes are for special occasions.

I no longer walk barefoot because my situation is better now; I live in the great United States of America, where I am working as a manager for a homeless program and completing my doctorate in public administration. I arrived here in 1996, the end of a journey of escape from the long, brutal civil war that destroyed my beautiful country. Stories like mine are common among Sierra Leoneans. I was among the first refugees in 1991 to cross the Makona River to neighboring Guinea seeking refuge from the rebels who attacked our villages from the Sierra Leone-Liberia border in east Kailahun District. I was just 9 years old at the time, and fled with my father. (My mother was not around at this time.) Despite the challenges in Guinea, I was relieved to have escaped. In the rebels’ zone, children were being recruited and kidnapped—and turned into child soldiers. One thing that made me happy was the pair of shoes that a UN worker provided me at our refugee camp in Guinea.

We left Guinea after a short stay and crossed back over the border to Freetown, where we had relatives. My country’s capital city was the safest place in Sierra Leone back then because of its western location—the war was raging in the east. I had expected Freetown to be a more prosperous place, but was disappointed to see children and adults walking barefoot as many do in the villages. I even sat in class with students who did not have shoes. I settled in Freetown and found myself playing soccer and other games barefoot with the other children. Consequently, our toes and the soles of our feet sustained many wounds, which became infected and led to swelling, pain, and the discharge of too much pus to recall here.

Today I think about those feet, and about barefoot children as I mourn, from the comfort of the U.S., those who have died from the Ebola virus in Sierra Leone, as well as in Liberia, and Guinea. And I can’t help but worry that barefoot walking is contributing to the spread of Ebola in that region, as well as other contagious viruses, including Hepatitis A and C, that are transmitted through contact with blood and other bodily fluids.

Controlling the Ebola outbreak is a complex, global effort. But at the local level, we could start with something very basic, but very important. Providing shoes to barefoot walkers would make them safer and healthier. It also might save us.

Stephen T. Fomba is program manager at the San Gabriel Valley Consortium on Homelessness, and is studying for a public administration doctorate at the University of La Verne. This piece originally appeared at Zocalo Public Square. 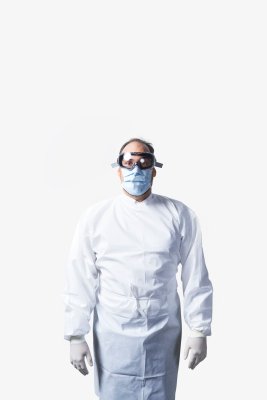 What Comes After Ebola
Next Up: Editor's Pick