Facebook told TIME a whopping 2.4 million unique videos related to the Ice Bucket Challenge have been posted on the social media site. As of August 13, there were 1.2 million — a figure that has doubled in just five days.

Most of us know about the Ice Bucket Challenge as a way to raise awareness for ALS, better known as Lou Gehrig’s disease. People have been challenging everyone from their grandpa to Bill Gates to either dump a bucket of ice water over their head or donate $100 to an ALS-related charity. The movement has raised more than $12 million for the ALS Association since July 29, compared to $50 in the same period last year.

“Each line [in the map below] represents at least 10 connections between nominators and nominees for the challenge,” Facebook told TIME. “Many attribute the challenge to former Boston College baseball player, Pete Frates, who was diagnosed with ALS in 2012, which could explain the concentration in Boston.”

Frates’ disease took the athlete’s ability to speak and move his limbs, so he challenged people in his social network with the help of the song “Ice, Ice Baby” on July 31. It went viral from there.

Facebook found that more than 28 million people have discussed the Ice Bucket Challenge on the site — ranging from posting videos to liking related statuses, between June 1 and August 18.

Although the challenge was linked to ALS in July, Facebook’s data shows that it was being discussed weeks before. The WSJ reports that it actually got a humble start on the professional golf circuit, when golfers would douse themselves with ice water to get other golfers to support pet charities. 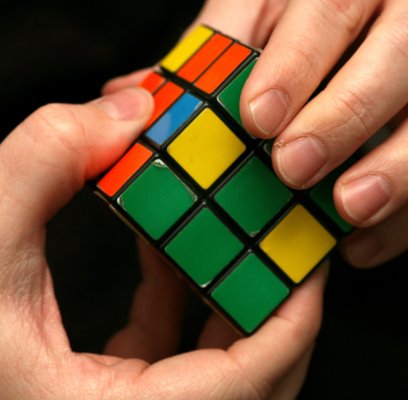 Man Solves Rubik's Cube With Strangers Making a Turn Each
Next Up: Editor's Pick