The Miami Heat's LeBron James in the second quarter against the San Antonio Spurs in Game 6 of the NBA Finals, on June 18, 2013.
Pedro Portal / Zuma Press
By Laura Stampler

When a reporter asked James on Wednesday about Oklahoma City Thunder star Kevin Durant’s improved passing game this season, James answered: “That is retarded to me. Kevin Durant is great at being a passer.”

James quickly apologized after the team’s 112-95 loss to the Thunder, the Sun-Sentinel reports, saying that using the slur is a bad habit he has been trying to break.

“I used the word retarded before,” James said. “Obviously, it had nothing to do with kids that are underprivileged . There’s no knock on them. It’s a word that’s been around for a long time where I grew. It’s a bad habit, so I try to break it. If I use it again, I’m going to try to do my best not to. I mean no disrespect.”

James found himself in the same situation when he was caught on camera in 2011 saying that a reporter’s question was “retarded” under his breath. Watch below:

When James was first asked about his use of the word, for which advocacy groups demanded an apology, the all star tried to minimize the situation. “I didn’t understand the question,” he said. “It is definitely blown out of proportion. … I think that’s a stupid question. I don’t know why someone would even ask that question.”

Later that day, however, James changed his tune: “I want to apologize for using the ‘R’ word after Game 3. If I offended anyone, I sincerely apologize.” 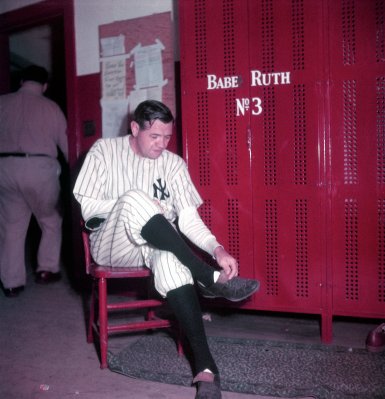 Babe Ruth: Color Photos of an Ailing Legend
Next Up: Editor's Pick