A Russian serviceman sits atop an armored vehicle outside Kamensk-Shakhtinsky, Russia's Rostov region, on Aug. 15, 2014. Dozens of heavy Russian military vehicles amassed on Friday near the border with Ukraine where a huge Russian convoy with humanitarian aid came to a halt as Moscow and Kiev struggled to agree border crossing procedures
Maxim Shemetov—Reuters
By Per Liljas

Correspondents from the Guardian and the Telegraph say they witnessed at least 23 armored personal carriers, fuel trucks and other logistics vehicles marked with Russian military plates passing through a break in the border fence.

Ukraine has long held that Russian troops are operating within its borders, but evidence has been sparse. This incursion, while small, feeds fears that a larger-scale invasion may be looming.

Meanwhile a Russian convoy of about 260 trucks is currently halted some 30 km short of the border. Russia claims it is a dispatch of humanitarian aid to war-torn eastern parts of Ukraine. Kiev, on the other hand, fears it may be a covert shipment of military supplies to Moscow’s separatist allies, or equipment to be stockpiled ahead of a future Russian invasion. Russia has amassed around 20,000 troops along the border, and NATO chief Anders Fogh Rasmussen warned Monday that there was a “high probability” of further intervention from Moscow.

On Thursday, the kilometers-long line of white trucks unexpectedly changed course, stopping in the vicinity of a border crossing held by the separatists. This threatened to spark a new row with Kiev, which has previously said that it would regard it as an invasion if the convoy used a border crossing not controlled by Ukraine.

However, tensions started easing Friday as Ukrainian border service representatives and custom officials were able to begin inspecting the cargo in the presence of representatives from the International Committee of the Red Cross.

Kiev has sent its own aid shipments to the country’s east, but the need for humanitarian relief remains dire. Though authorities boast that the city of Donetsk will be fully recaptured by the country’s Independence Day on Aug. 24, Ukrainian advances in rebel-held territory have also had a grave humanitarian impact.

In the past two weeks, the conflict’s total death toll has almost doubled, and by a conservative U.N. estimate now stands at nearly 2,100. There are major shortages of water, electricity and medical supplies. The self-declared separatist governor of Luhansk announced his resignation Thursday, saying in a video posted on social media that the region was “at the edge of a human catastrophe.”

Russian President Vladimir Putin has declared all claims of ulterior motives for their humanitarian dispatch as “absurd.” Yet, reporters, including Courtney Weaver of the Financial Times, have noted that the convoy has taken on a militarized appearance, acquiring an escort that includes antiaircraft weapons and helicopters. Weaver also noted that most of the trucks in the convoy appeared to be Russian military trucks covered in either white paint or white tarpaulin. 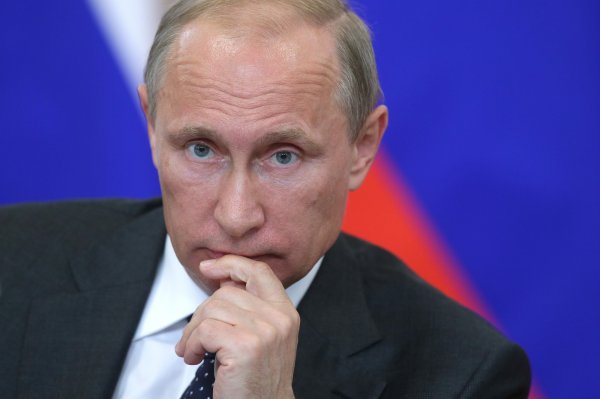 Russians Pay the Price for Putin's Ukraine Adventure
Next Up: Editor's Pick