Why Cops in Ferguson Don't Have Body Cameras

Police officers keep watch from an armored vehicle as they patrol a street in Ferguson, Mo., on Aug. 11, 2014
Mario Anzuoni—Reuters
By Josh Sanburn

The circumstances surrounding the fatal police shooting of unarmed teenager Michael Brown in Ferguson, Mo., are still largely unknown. St. Louis County police say Brown assaulted a Ferguson police officer and tried to take his gun. A witness disputes that account, saying Brown’s hands were raised when an officer fired. But the ongoing investigations by authorities are hamstrung in part by the fact that no video exists of the incident. Ferguson police chief Thomas Jackson said Wednesday that while the department has two dashcams, neither have been installed in police vehicles.

And Ferguson police, like most law-enforcement agencies around the country, doesn’t utilize a technology that could have brought some clarity to the incident: body-worn cameras, which only a small number of police departments around the U.S. have deployed.

In the past few years, police departments in Fresno, Calif.; Pittsburgh; Salt Lake City; Cincinnati and others have begun experimenting with small, wearable cameras that, once turned on, record virtually everything the officer is seeing.

Last week, New York City public advocate Letitia James called for police officers there to use body-worn cameras as a way of keeping a check on police misconduct after the death of Eric Garner, who was placed in a chokehold by an NYPD officer. And since Ferguson, there are scattered calls for more departments to use them. The problem, law-enforcement officials and experts say, is that these cameras are expensive — and there’s limited evidence detailing their effectiveness.

But several departments have found success in utilizing them.

“We see our officers acting more professional when they’re using them,” says William Farrar, the police chief of the Rialto Police Department in California, which has body-worn cameras for nearly 80 officers. “And once the citizens know they’re being videotaped, a majority of the time, the situation tends to de-escalate because they know they’re being recorded.”

The Rialto police began testing body-worn cameras in the field in 2012. In the first 12 months, the department saw an 88% decline in complaints filed against its officers compared with the year before and a 60% reduction in use-of-force incidents. Farrar says the agency has also saved time by not having to conduct as many investigations into use-of-force incidents, and the department has seen a decrease in court costs because more suspects are agreeing to plea bargains because of indisputable video evidence.

But Rialto is an outlier. While departments in Phoenix and Mesa, Ariz., also appear to have found success with cameras, there isn’t much hard evidence that they increase transparency among law-enforcement agencies while curbing police misconduct.

“There’s very little available research,” says Mike White, an Arizona State University criminology professor who recently completed a survey for the Department of Justice regarding the cameras, largely finding that he couldn’t recommend them for police departments based on the evidence.

Currently, there are only five completed studies that look at the effects of body-worn cameras, many of which vary in their methodologies. In Rialto, for instance, White argues that while there is anecdotal evidence that suspects change behavior and become less hostile when they know they’re being videotaped, it’s just one study of one police unit that was conducted internally and not verified by an outside agency or researcher. Also, while citizens in Rialto filed fewer complaints regarding officer conduct during the study, White says those complaints might have gone down because citizens — knowing that they were recorded — realized their complaint would be frivolous, not necessarily because police conduct had shifted.

The cost is often prohibitive for many agencies as well, with the cameras themselves costing about $800 to $1,000, along with varied costs for departments to store the data.

There are, however, a number of ongoing studies. Barak Ariel, a lecturer at both the Hebrew University of Jerusalem and Cambridge University in the U.K. who has worked with Rialto police, is involved in 30 tests of body-worn cameras among about a dozen police forces in the U.S., Europe, Israel, Northern Ireland and Uruguay, in which half the officers are equipped with cameras. Ariel says he sees preliminary evidence that they act as a deterrent on aggressive behavior.

“We don’t know whether the camera’s working on the civilian or the police officer,” Ariel says. “Maybe both. But we know it’s a deterrent. We just don’t know in which direction.”

White does say that the early evidence on wearable cameras for police is promising, and it’s something that might have been able to change the facts on the ground in Ferguson.

“We don’t know which account is accurate,” White says, referring to the disputed stories from St. Louis police and witnesses. “With body-worn cameras, we would have a permanent video record that could be viewed immediately that would tell everybody what happened.

“I don’t think there’s any evidence yet to say that those types of encounters could be avoided,” White adds. “But I couldn’t help but think, what would’ve happened if the officer was wearing a body-worn camera?” 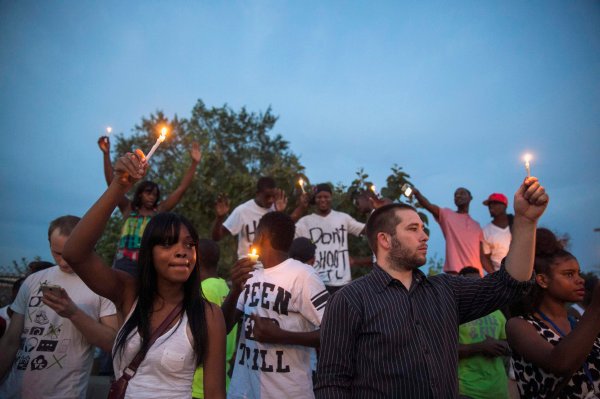 A Mix of Hope and Anger at Peaceful Ferguson Vigil
Next Up: Editor's Pick