A Mix of Hope and Anger at Peaceful Ferguson Vigil

At 6:20 p.m. Thursday, the crowd bowed their heads and the chants went silent. They were hundreds strong, black and white and Asian, some tattooed, some clean-cut, wearing business casual and Cardinals gear and homemade red armbands in honor of the dead. Standing under the Gateway Arch, an iconic symbol of America’s promise, they raised their hands to the sky in tribute to Michael Brown, the young black teenager whose fatal shooting Saturday in a St. Louis suburb has opened deep wounds and turned a placid suburb into a war zone.

But this scene, one of dozens of vigils organized around the U.S. on Thursday to protest police brutality, looked nothing like the apocalyptic images filtering out of Ferguson, Mo., just a short drive away. There were no clouds of tear gas and no clashes between citizens and cops, who carried no heavy weapons and stood quietly at the fringes of the crowd. The racial unrest that has exploded nearby was nowhere in evidence, as a diverse crowd — about half of them black, half of them white — gathered to pay tribute to Brown. And in Ferguson too tensions were beginning to cool following pleas for calm from President Barack Obama and Missouri Governor Jay Nixon — and in the wake of Nixon’s decision to pull the oft-criticized St. Louis County police force out of the town in favor of state troopers.

Organizers dubbed it the national moment of silence. And once the minute was over, the emotion spilled out. In speeches and interviews, residents of St. Louis and its neighboring suburbs described a poisonous relationship between police and the African-American community that boiled over after Brown’s shooting but had been bubbling for many years.

“Racial profiling — it happens so much,” said Delancy Davis, 27, speaking quietly under a black St. Louis hat. “It’s really prevalent in the counties, more so than in the city. Young black kids don’t like going out to the county because you’re going to get stopped.”

“We go through this a lot in the suburbs,” said Kim Stauther, 38, of St. Louis. “You get pulled over, just for driving while black. The cops really don’t respect us.”

It remains to be seen if the peaceful scenes in Ferguson and St. Louis on Thursday night were a sign that the tumult may be subsiding. Through their anger, the protesters expressed hope that the police had changed their tune. Some members of the crowd had been spending long hours this week protesting in Ferguson, and said the evening’s atmosphere was proof that the riots were driven by a heavily militarized police force.

“There are more people here” than in any of the violent protests in Ferguson, said Devin Booker, a 28-year-old personal trainer from Ferguson, who recalled running from tear gas and being menaced by police dogs this week. “This is peaceful because the police don’t have army gear; they don’t look like they’re running black ops.”

Nearby, Brown’s mother Lesley McSpadden stood before a bank of cameras, wearing mirrored sunglasses, a black T-shirt with an image of her son and red sandals. Her daughter Deja, Michael’s sister, leaned on her shoulder as a cousin, Eric Davis, described the family’s anger at the Ferguson police, who he said called today for the first time. (The family also received a call today from Attorney General Eric Holder, Davis said, who passed on well-wishes from Obama.)

“We’re in the dark,” said Davis, who described Brown as a quiet, soft-spoken boy. “That’s a hard thing to do when you’ve lost a child.”

As the light began to fade, the crowd toted signs, clasped shoulders and chanted the week’s chilling rallying cry: “Hands up, don’t shoot.” They congratulated each other on the peaceful protest and promised more to come. Many in the crowd expressed regret for the riots, but said that though the clashes had tainted a pure cause, drawing the nation’s attention had positive benefits nonetheless.

“This is the beginning of a big change,” said Moses Grimes, a 29-year-old counselor for troubled youth. “This will be a movement, and I think it will have an effect.” 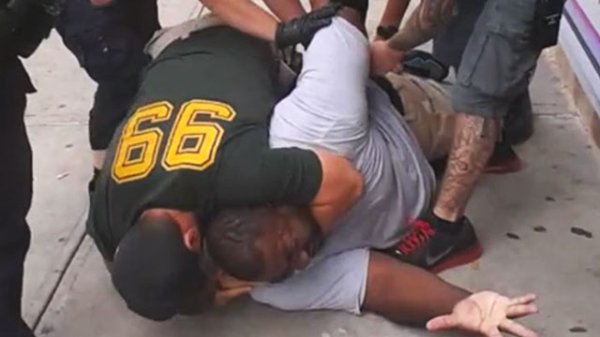