President Barack Obama speaks about the unrest in Ferguson, Mo. while on vacation in Edgartown, Mass. on Aug. 14, 2014.
Rick Friedman—Pool/Getty Images
By Massimo Calabresi

The Justice Department upped its involvement in the situation in Ferguson, Mo. Thursday, deploying advisers to local law enforcement, mediating between local faith leaders and government authorities and deploying the head of the criminal section of the department’s civil rights division to the scene.

Attorney General Eric Holder added rhetorical support to the moves Thursday afternoon from Martha’s Vineyard, where he is vacationing with President Barack Obama. In a statement, Holder suggested local law enforcement might be heightening tensions and that forces in Ferguson are insufficiently diverse.

“The law enforcement response to these demonstrations must seek to reduce tensions, not heighten them,” Holder said. Referring to discussions that took place this morning between civic leaders and law enforcement officials, mediated by members of the Justice Department’s Community Relations Service, Holder said, “Over time, these conversations should consider the role that increased diversity in law enforcement can play in helping to build trust within communities.”

Federal officials investigating the death of Michael Brown, the young man whose shooting Saturday at the hands of local cops triggered the unrest, have interviewed a friend, Dorian Johnson, who says he witnessed the shooting, a person familiar with the investigation says. A lawyer for Johnson told MSNBC that local law enforcement officials weren’t interested in hearing his account of the shooting. 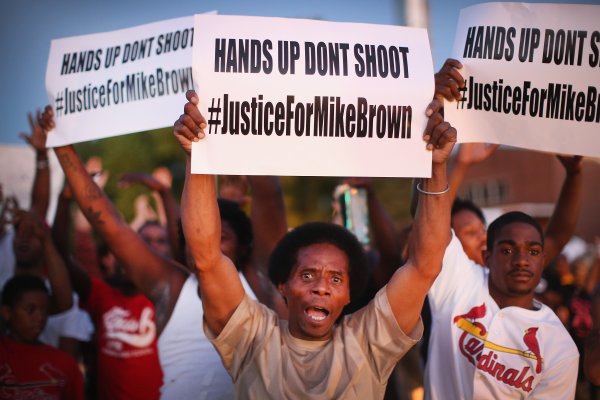