Missouri Governor Jay Nixon listens to residents and community leaders as they discuss unrest in the town of Ferguson following the shooting death of Michael Brown during a forum held at Christ the King UCC Church on August 14, 2014 in Florissant, Mo.
Scott Olson—Getty Images
By Zeke J Miller

If the citizens of Ferguson, Mo., were looking Thursday for a voice that reflected the grave situation facing their city after days of violence, they did not find it in their governor, Jay Nixon.

The Democrat stumbled and mumbled his way through a 38-minute news conference Thursday, when he announced that the Missouri Highway Patrol would replace the aggressive St. Louis County police department as the lead agency for securing Ferguson after nights of confrontations between protesters and police.

“I try to put gasoline into the engine of fire engines when I see them and not on the fires that are existing,” he said haltingly, when asked about his lack of visibility for most of this week.

Nixon had been silent on Saturday’s shooting of unarmed black teenager Michael Brown for 72 hours, until delivering brief comments at a local community meeting Tuesday evening. But his pleas for prayer and patience went unheeded, as violence and the heavy-handed police response escalated. Rubber bullets and tear gas were aimed at mostly peaceful protesters, as law enforcement officers armed in tactical gear aimed scoped rifles from the tops of military surplus vehicles.

By Wednesday, the situation drew additional national attention after the arrest of two journalists and images that resembled a domestic war zone on television screens across the country. Meanwhile, Nixon was on the other side of the state preparing to attend the 62nd Annual Governor’s Ham Breakfast at the State Fair. Political activists, journalists, and community leaders blasted Nixon’s silence, and by 11:45 p.m. Wednesday, the governor was playing defense.

“The immediate security responsibilities will now be directed by the Missouri highway patrol,” he announced at a news conference after canceling the state fair appearance to travel to Ferguson to meet with residents and law enforcement.

This was not Nixon’s first time under fire from the state’s black community. The local NAACP criticized him in the mid-1990s as state Attorney General for efforts to undo Missouri’s desegregation school busing program. A longtime political observer told TIME that Nixon appeared gun-shy and lacked warmth when dealing with the state’s black community and St. Louis county in general.

Asked Thursday about his relationship with the state’s black community before and during this crisis, Nixon reached for an answer before saying he “[appreciates] the relationship” he has with them but expects criticism in his job. Asked whether a special prosecutor should be appointed he chuckled, adding “We’ve got two already.” State and federal prosecutors are investigating the circumstances of Brown’s death, as the credibility of local officials has been put in doubt.

That was better than an earlier appearance Thursday at a meeting with residents at a church, where Nixon tried his hand at comedy to defuse the tense situation, cracking a joke about being late because he had just gotten off the phone with President Barack Obama, and quipping that he didn’t mind that he looked heavy on television.

Nixon had long been seen to have national ambitions, declining to rule out a presidential run in 2016 as recently as February. Democratic operatives had seen him as a short-list contender for the role of former Secretary of State Hillary Clinton’s running mate. But his handling of the Ferguson crisis could hinder his national prospects.

Nixon spoke in faux mil-speak as he tried to project command of the situation, saying the new police efforts would be geared at toward “maintaining the peace but allowing more movement, trying to bring in different tone of the amplitude of the protective force.”

Meanwhile, St. Louis County Executive Charles Dooley and Highway Patrol Capt. Ron Johnson delivered impassioned pleas for calm and promised a new approach that respects the rights of the people of Ferguson. “We can do better than this,” Dooley said. “Calm down, stand down, and let’s be reasonable.”

Johnson, a native of the area, promised a more peaceful demeanor from the officers now under his command. “We are going to have a different approach and have the approach that we’re in this together,” he said. 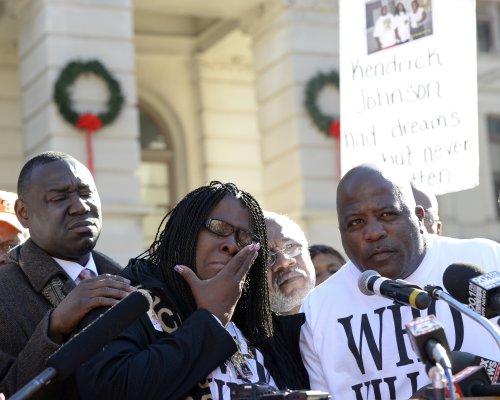 Family Files New Suit Over Teen's Death at School
Next Up: Editor's Pick