Violence Worsens in Ferguson on 4th Night of Clashes

Demonstrations over the police shooting of an unarmed black teenager continued for a fourth night in Ferguson, Mo., on Wednesday, as protesters clashed with police and 10 people were arrested.

Authorities have so far refused to identify the officer involved in the shooting death of Michael Brown last weekend, citing the officer’s safety. But the decision has fueled anger among the demonstrators. On Wednesday, St. Louis County Prosecuting Attorney Robert McCulloch told the St. Louis Post Dispatch that details from the investigation would not emerge for weeks.

Brown, 18, was shot dead on Saturday, prompting the racially charged demonstrations in the majority black suburb of St. Louis, where the police force is nearly all white. Authorities say Brown was shot in a struggle for a gun, while some witnesses claimed Brown had his hands in the air. Ferguson Police Chief Thomas Jackson told reporters Wednesday that the officer who shot Brown had been struck in the cheek during the incident and taken to hospital.

Gov. Jay Nixon urged “patience and calm” in a statement on Wednesday and said that he will visit the area on Thursday.

“The worsening situation in Ferguson is deeply troubling, and does not represent who we are as Missourians or as Americans,” he said in the statement. “While we all respect the solemn responsibility of our law enforcement officers to protect the public, we must also safeguard the rights of Missourians to peaceably assemble and the rights of the press to report on matters of public concern.”

Some 40 people have been arrested since Saturday, according to Reuters, and authorities have asked protesters not to demonstrate in the evenings. On Wednesday night, St. Louis Alderman Antonio French and two journalists, Wesley Lowery of the Washington Post and Ryan Reilly of the Huffington Post, were among those detained. 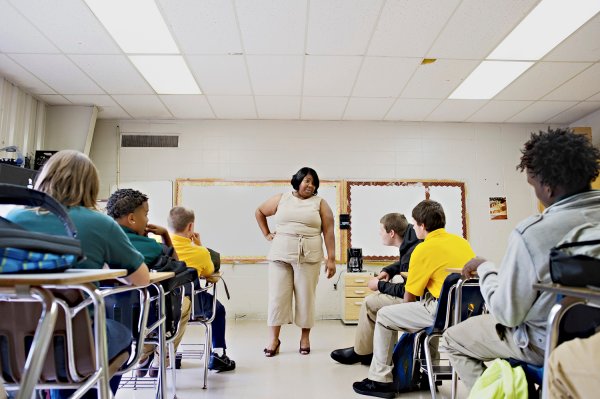 Crashing the Core Curriculum
Next Up: Editor's Pick