Displaced people from the minority Yazidi sect, fleeing violence from forces loyal to the Islamic State in Sinjar town, walk towards the Syrian border, on the outskirts of Sinjar mountain, near the Syrian border town of Elierbeh of Al-Hasakah Governorate on August 11, 2014.
Rodi Said—Reuters
By Maya Rhodan

The Pentagon may rule out an emergency evacuation mission, after a successful U.S. Army Special Forces mission to check on thousands of stranded Iraqis revealed that conditions have improved more rapidly than expected for the refugees.

The team of less than 20 soldiers, along with USAID personnel, was flown to and from a mountain in northern Iraq via helicopter on Wednesday to evaluate out how to rescue Kurdish speaking Yazidis, who have faced dire conditions since they fled Islamist fighters.

The team did not meet any armed resistance from the militant Islamic State of Iraq and Greater Syria (ISIS), Pentagon Press Secretary Rear Admiral John Kirby confirmed in a statement Wednesday evening.

Kirby also confirmed that the team had discovered there were fewer Yazidis taking refuge on Mt. Sinjar “than previously feared,” after successful nighttime evacuations over the last several days.

“The Yazidis who remain are in better condition than previously believed and continue to have access to the food and water that we have dropped,” Kirby said.

“What [Obama]’s ruled out is re-introducing U.S. forces into combat on the ground in Iraq,” Rhodes told reporters Wednesday on Martha’s Vineyard, where the President is vacationing. “But there are a variety of ways in which we can support the safe removal of those people from the mountain.”

An unknown number of an ethnic minority group known as the Yazidis have been stranded on a mountain range in northern Iraq for days, fleeing ISIS militants who spread into Iraq from Syria. The United Nations declared a “level 3 emergency” for Iraq on Wednesday in an effort to speed humanitarian aid to those stranded, while relief airdrops have come from the U.S. and several other nations. Washington has made the stranded Yazidis a top priority, deploying 130 military advisers to the region Tuesday to help plan rescue efforts.

Rhodes said Wednesday that the U.S. wants to find the best and safest way to get the trapped Yazidis off the mountain without having to engage ISIS militants.

“We have Kurdish forces who are engaged in the area,” Rhodes said. “We have international partners who also want to support the provision of humanitarian assistance. So we’ll look at what the best way and the safest way is to get those people off that mountain.” 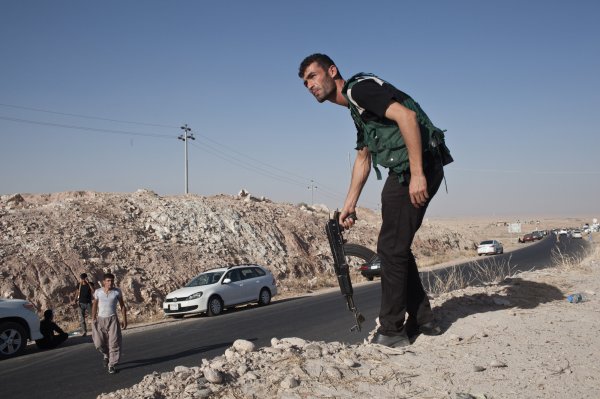 Kurds Welcome U.S. Help in Iraq, But Remember History of Betrayal
Next Up: Editor's Pick