A demonstrator throws back a tear gas container after tactical officers worked to break up a group of bystanders on Chambers Road near West Florissant in Ferguson on Aug. 13, 2014.
Robert Cohen—St. Louis Post-Dispatch/MCT/Zuma Press
By Kristina Sauerwein / Ferguson, Mo.

One man was critically wounded shortly after 1 a.m. by a St. Louis County Police officer following a night marked by loud, angry protests near the QuikTrip convenience store that was looted and burned following the death of 18-year-old Michael Brown in Ferguson, Mo. St. Louis County Police Officer Brian Schellman told the St. Louis Post-Dispatch that authorities received reports of shots fired in the area and armed men in ski masks, culminating in a man pulling a handgun on an officer, who then fired back. A handgun was recovered at the scene and police used tear gas. Also on Wednesday, just after midnight, a woman was apparently shot in the head in a drive-by shooting, also near the QuikTrip. But it’s unclear if the violence is related to the protests. The woman is expected to survive.

The shootings erupted after a tense night between protesters and police in full riot gear, guns sometimes drawn, as they stood in line barricading streets near the QuikTrip. At least three armed SWAT tanks were also on the scene.

The shooting death of Brown has had the town of Ferguson on edge for days, drawing national attention as some hold it up as an example of racial disparities in police action and the criminal justice system. Police have said Brown was killed in a struggle after he reached for an officer’s weapon, an account disputed by one of his friends and by his family.

Ferguson police also issued their first official statement since the shooting, saying Wednesday that they are “working to restore confidence in the safety of our community and our neighborhoods so that we may begin the healing process.”

“We ask that any groups wishing to assemble in prayer or in protest do so only during daylight hours in an organized and respectful manner,” the police department said.

Protests on Tuesday altered between calm and raucous, with protestors throwing bottles at police and sometimes refusing to disperse. In one instance, a man accelerated his car toward the police line, coming within about 30 ft. of authorities before turning around to both cheers and jeers from the crowd.

Throughout the night, crowds mobbed the busy street near the QuikTrip, with some walking sporadically in the street, obstructing traffic, while others peacefully marched on the sidewalk to the church where national civil rights leader Rev. Al Sharpton preached justice and peace during a town hall meeting.

From noon to midnight on Tuesday, the sound of car horns could be heard near the QuikTrip, with drivers honking in support of protesters yelling, “Hands up, don’t shoot” and brandishing signs that read “RIP Mike Brown.”

Obama called the shooting of Brown “heartbreaking” on Tuesday and called for calm.

“I know the events of the past few days have prompted strong passions, but as details unfold, I urge everyone in Ferguson, Missouri, and across the country, to remember this young man through reflection and understanding,” Obama said in a statement. “We should comfort each other and talk with one another in a way that heals, not in a way that wounds.”

Community members swept glass shards and bagged debris from the burned and looted QuikTrip on Tuesday. Several businesses that were vandalized reopened, including the Northland Chop Suey, where the inside smelled more like the plywood boarding windows than the crab ragoon customers love.

“It’s been slow,” said Boon Jamg, 60, “I’ve owned restaurants in the area for 35 years and I know people by name, many since they were kids. This is a good community. I love these people. I respect them. I am sad that some people disrespected me by vandalizing my business.”

He said the violence doesn’t represent Ferguson. “People are friendly,” Jamg said. “They care about this neighborhood. I’ve never had any problems until this week.” 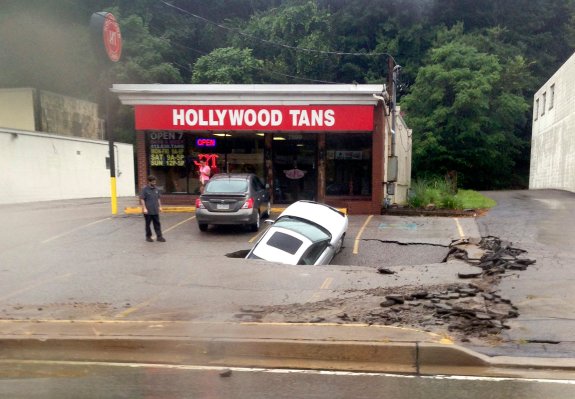