The $9-million buy from the Senate Democrats’ campaign committee is the group’s largest so far this year. Tillis is challenging Democratic incumbent Sen. Kay Hagan in a race that could help decide which party controls the Senate next year.

The new 30-second titled in “Black and White” says Tillis cut funds from the state’s public schools while giving tax breaks to “yacht and jet owners.” The Republican-led North Carolina state legislature in 2013 cut education spending over the next two years by nearly $500 million dollars.

“North Carolina deserves better than Speaker Tillis and over the next three months the DSCC will continue to highlight just how wrong Speaker Tillis is for North Carolina,” said Justin Barasky, a spokesman at the Democratic Senatorial Campaign Committee.

The ad comes one day after Hagan’s campaign attacked Tillis’ education agenda, calling it “irresponsible” and “destructive” in large part due to Tillis’ proposal to eliminate the U.S. Department of Education.

“After doing so much damage in Raleigh, promising to eliminate the Department of Education as his first action is just one more reason Speaker Tillis has the wrong priorities,” Hagan said.

Tillis has called for the elimination of the Department of Education, but the Tillis camp, McClatchy reports, said he would preserve financial aid and assistance to schools and thinks there is room for the department to work better with states and be more efficient. Tillis has also been critical of Hagan’s record in Congress, saying she has introduced “zero bills that have become law.”

“Kay Hagan is one of the most ineffective senators in North Carolina’s history, having failed to sponsor a single bill that became law during her six years in Washington,” said Tillis’ communications director Daniel Keylin in a statement last week. “Instead of working across the aisle to pass laws benefitting North Carolina families, Hagan has put her liberal special interest allies first, rubber-stamping President Obama’s failed partisan agenda 95 percent of the time.”

The North Carolina Senate race is one of seven races deemed toss-ups by the Cook Political Report. 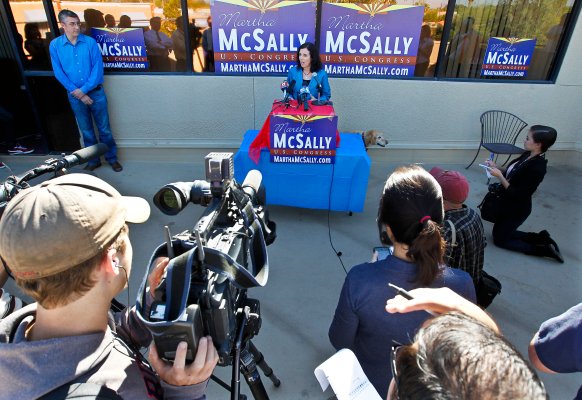 Immigration Not Top Election Issue on Arizona-Mexico Border
Next Up: Editor's Pick