Walking to his grandmother’s house last weekend in Ferguson, Missouri, Michael Brown was just days away from starting classes at a local college, where he planned to study music.

But Brown never made it.

An officer with the city’s police department stopped him just blocks from his grandmother’s home. After a tense exchange, Brown, who was African-American and unarmed, wound up face down in a pool of his own blood, felled by the officer’s pistol.

Just how Brown died remains unclear. Witnesses say the officer, whom authorities have refused to identify, shot the teen as he fled with his hands in the air. Meanwhile, St. Louis County officials maintain the officer fired only after Brown struggled for his gun. By Sunday night, peaceful vigils had turned to violent protests. Looters ransacked businesses. They threw rocks at police and chanted “Don’t shoot,” as officers in riot gear fired tear gas to disperse the angry crowds.

In death, Michael Brown, like Trayvon Martin before him, has become a rallying cry – a symbol of the widespread inequality and mistrust many feel African-Americans, and particularly young African-American men, face in modern American society. But while the anger felt by St. Louis-area protesters is shared in communities across the country, the region’s distinct history of racial segregation and inequality goes a long way toward understanding the particular racial tensions that have engulfed this community 10 miles northwest of downtown St. Louis.

In certain respects, Ferguson, a town of roughly 21,000, is not unlike any number of the small, largely black, lower-middle class towns that populate much of North St. Louis County. With a population that is roughly two-thirds African-American, Ferguson itself has a median household income of around $37,000 ($10,000 less than the rest of the state), and more than one-fifth of its residents live below the poverty level.

Like the City of St. Louis, which continues to be one of the country’s most racially segregated cities, St. Louis County suffers its own version of what’s known locally as the Delmar Divide (so named for Delmar Boulevard, an east-west thoroughfare that acts as the city’s de facto color line).

Historically, St. Louis’s African-American population lived in decrepit inner city slums. But that began to change in the 1950s, as deindustrialization and emergent white flight conspired to erode the city’s population. The urban renewal projects of the era, which included the construction of the infamous Pruitt-Igoe housing project and the vast tracery of highways that now entangles the city, only accelerated the city’s decline, razing many of its historically black neighborhoods and relocating its residents, ultimately, to inner-ring North County suburbs like Ferguson. The combined result is that St. Louis, once the nation’s fourth largest city, has lost more than 500,000 residents in the last 60 years.

“The wealthier population of St. Louis has always been running from poverty,” the late James Neal Primm, author of the definitive St. Louis history, Lion of the Valley, told me shortly before his death. “No one ever says this, but one of the results of rebuilding the city was getting rid of a large and impoverished population that lived in blighted districts. The whole idea was to make St. Louis what it had been in the past: a leading city in the Midwest.”

But just as whites in the city fled blacks, so whites in the county soon moved further out as well, this time to exurban communities like the adjacent St. Charles County, which is 90% white and whose population has grown 12-fold since 1950.

The whites that did remain in the region’s older suburbs, however, also remained in positions of authority, often filling roles in municipal police forces and as elected officials – a tense imbalance of power that ill-reflects the populations they serve. This is clearly the case in majority African-American Ferguson, where the mayor and most of its city council members are white, and only three of the city’s 53 police officers are black.

Through it all, however, St. Louis has remained something of a rarity. While other rustbelt cities like Detroit have suffered profound racial unrest, St. Louis, rife with its own racial disparities, has never rioted – until now.

Blame it on the region’s long simmering racial tensions. Blame it on a string of recent killings of unarmed black men at the hands of authority figures. Blame it on the quicksilver outrage of social media, opportunistic thuggery or an overzealous police response.

Whatever the cause – and there are many – something has shifted in St. Louis during these tumultuous days following Michael Brown’s death. As looters have destroyed businesses, burned a convenience store and even prompted the Federal Aviation Administration to implement a no-fly zone over Ferguson – all amid other non-violent protests – Brown’s death has become not merely a national rallying cry against the inequalities faced by young black men, but also a moment of reckoning for the St. Louis region.

Malcolm Gay, a writer living in St. Louis, is the author of a forthcoming book, The Digital Mind, to be published in 2015. 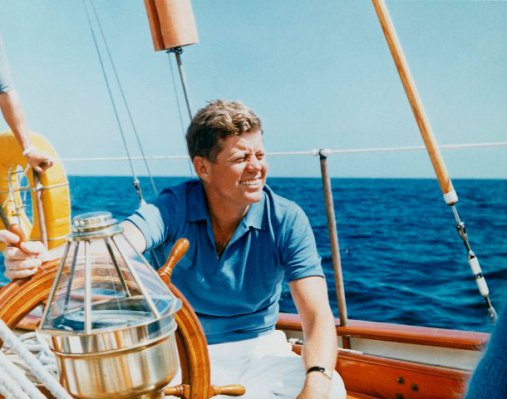 How Presidents Take Vacation
Next Up: Editor's Pick