Pope Francis Goes to Korea: The Spiritual Meaning of Travel During Turmoil

Pope Francis is headed to South Korea on Wednesday, in the midst of what continues to be a particularly difficult month for the world.

Violence in Gaza and Israel continues to escalate. Religious minorities in Iraq are fleeing ISIS brutality. The Ebola virus is spreading through West Africa. Children are flooding the United States border to escape Central American violence. A civilian airliner was downed in Ukraine amid Russian separatist fighting.

It is safe to say that global spirits are down, and it is a heavy overall context surrounding Pope Francis’ third international trip, a five-day visit to the southern half of a divided Korean peninsula. In Seoul, he will join Asian Youth Day, where thousands of Catholic youth from some 30 countries are gathered. He will also beatify dozens of 18th-and 19th-century Korean martyrs, meet with families of the recent Sewol ferry wreck, and give 11 speeches as he travels through four cities: Seoul, Daejeon, Kkottongnae, and Haemi.

On its face, the trip is important for some obvious political and religious reasons. It has been almost 20 years since a pontiff visited the continent. Pope John Paul II visited South Korea twice, in 1984 and in 1989, then the Philippines in 1995, but Pope Benedict XVI never made the trip. Pope Francis is expected to stress reconciliation and the problems of division, as he will be honoring Christians who died during periods of persecution. He also symbolically comes to minister to the Christians to the North as well, as the archbishop of Seoul, Cardinal Andrew Yeom Soo-jung, is also the apostolic vicar for Pyongyang, meaning that he is appointed to guide the North Korean church as well, even if they are inaccessible.

Political relations with North Korea are off to an expectedly rocky start, as the country already turned down the invitation to send a delegation to Seoul for the Pope’s visit. Holy See spokesman Frederico Lombardi has made it clear that Pope Francis is not planning a visit to the Demilitarized Zone, and it does not seem likely that Pope Francis will announce that he is inviting North Korea’s Supreme Leader Kim Jong Un and South Korean president Park Geun-hye to pray together at the Vatican—an approach he tried during a visit to Bethlehem to promote Middle East peace.

Francis’ trip will also be the first time that a pope’s plane flies through Chinese airspace. The Vatican does not have formal relations with Beijing, and the Chinese government did not permit Pope John Paul II to fly over the country in 1989, several months after the Tiananmen Square protests. It is customary for the Pope to send a message to the leaders of the countries he flies over, and so any message to China carries historic weight.

Religiously, Francis’ trip signals his continued focus on new regions of Catholic Church growth. Christianity in South Korea has grown exponentially in recent decades. In 1910, only 1% of the region identified as Catholic, Protestant, or with another denomination of Christianity. By 2010, that share had risen 29%, according to the Pew Research Center. Protestant Christianity, especially its evangelical and Pentecostal strains, is the more common variety: for every five Catholics in the country, there are about eight Protestants. But Francis is no stranger to evangelical strains of Catholicism, or to ecumenical moves bringing the two genres of Christianity together. It is a trend familiar to Latin and South America for decades, and so the first trip of the first Latin American Pope—one who personally knows the ins and outs of these two communities—has special meaning for a region that is experiencing similar change.

But there is another reason that this trip is important right now, and it is harder to quantify: the trip poses a new test for the Holy Father’s global spiritual leadership. It is easy for a religious figure to symbolize a new era of hope and peace when everything is peachy. It is another hallmark of spiritual influence altogether to inspire hope when violence abounds. What can a peace-making trip mean in the midst of such all-encompassing violence? Can he point to a hope that goes beyond mere words, to a hope that is somehow real?

How Pope Francis represents the answers those questions matters, not just for pilgrims in the Korean peninsula, but also for seekers across the world. 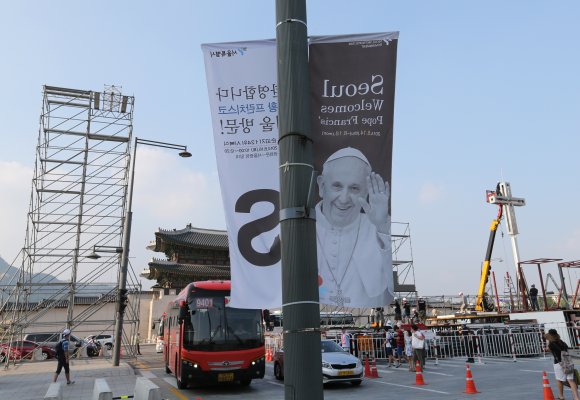