Robin's Pain: The Mystery of Suicide — and How to Prevent It

The great paradox of the human brain is that it can’t feel pain. The organ that is the seat of all joy and worry and love and sorrow and whimsy and fear is itself insensible to injury. It’s the reason brain surgery can be conducted on conscious patients without their being any more physically aware of the cutting than if a garment they were wearing were being violated the same way.

But the pain the brain can cause — the bottomless well of grief, the psychic blackness of depression — is something else again. There is both presumption and a certain pointlessness in trying to explain the awful convergence of sorrow and circumstance that drove Robin Williams to end his life. Williams himself may not have known, and if he did, the secret died with him. That doesn’t stop others from trying to make sense of it, of course — and so we hear that he was suffering from clinical depression or bipolar disorder, or that his battles with substance abuse finally claimed him.

Williams was publicly sanguine about his mental state, telling NPR in 2006, “No clinical depression, no. I get bummed, like I think a lot of us do at certain times. You look at the world and go, ‘Whoa.’ Other moments you look and go, ‘Oh, things are O.K.’” But after his death, his representative released a statement saying he had been “battling severe depression of late.”

The only thing that can be said with certainty is that Williams arrived at the same terrible place 39,000 other Americans reach each year, and like them, he concluded that the only way to annihilate a terrible despair was to annihilate the self. All anyone can do responsibly is reason back from there — reverse engineer the tragedy — and see what that might reveal.

The numbers can tell you something — sort of. Up to 90% of all people who commit suicide have been diagnosed with depression or some other form of mental illness in their lives. About one third of people with serious depression have had struggles with drugs and alcohol, perhaps as a result of trying to medicate their pain chemically. About 25% to 35% of people who commit suicide have a chemical substance in their blood at the time of death.

But there are plenty of depressed or chemically dependent people in the world, and while their struggles are real, their stories — and their lives — don’t end the way Williams’ did. The difference appears not just to be pain, but pain of a particular valence.

“It’s intolerable, unbearable anguish that can’t go away,” says psychologist Dan Reidenberg, executive director of Suicide Awareness Voices of Education (SAVE) and U.S. representative to the International Association of Suicide Prevention. “No matter what people have tried — treatment, medication — it doesn’t help. Logic becomes unreal. Attention and focus fall apart. The brain is just an organ and at some point it says, ‘I can’t take the pain anymore. I must take myself out.’”

But that doesn’t happen overnight. There’s a certain ambivalence and a strange kind of deal-making that can go on before a decision to die is actually reached. Suicidal scenarios may be considered, even planned, taken off the shelf and toyed with as a possibility. “This starts to play certain tricks on the mind,” says Reidenberg. “People think, ‘If someone smiles at me today I’m not going to do it. I’m going to have my last meal and if that goes well, I won’t do it.’”

Not all suicides creep up so slowly — or at least they don’t seem to. Situational despair — the kind that comes from the death of a loved one or a sudden bankruptcy — can, anecdotally, precede a suicide, but this happens less than is popularly believed. All of those investors who leapt to their deaths when the stock market crashed in 1929? Those were mostly a myth — though there were some isolated suicides in the days and months that followed the crash. And even in those cases, there was likely an underlying depression or mental illness that was exacerbated by circumstance. If tragedy were the threshold requirement for suicide, a spectacularly successful and globally celebrated person like Williams — or Kurt Cobain or Ernest Hemingway or Marilyn Monroe — would never have ended things as they did.

On those occasions that short-term pain does play a role in suicide, it’s likelier to occur among teens. That’s partly because the impulse control region of their brains have not fully come online yet — which is why even happy teens make such wildly poor decisions sometimes — and partly because they have such a flawed sense of the long arc of time. “The teenager cares about right now, what’s in front of me,” says Reidenberg. “They’re not looking at the next 60 years, they’re thinking about the next six minutes.”

The biggest thing working in the teens’ favor is that they often seem less than entirely certain about the wisdom of suicide, even after they’ve resolved to try it. “There’s a much higher rate of suicide attempts among adolescents than among other groups, but a much lower rate of actual death,” says psychologist John Draper, project director of the National Suicide Prevention Lifeline, which runs a website and 24-hour hotline (1-800-273-8255) for people in crisis. “A big part of them doesn’t want to die and the overwhelming majority get through those moments and are glad they’re alive.”

Indeed, says Reidenberg, both teens and adults who attempt suicide but survive often report that in the instant after they took the decisive step — swallowing the pills, leaping from the window — they began hoping that they’d survive the fall or be found alive before the drugs could do their work. Some never try again.

Stopping people short of that point — or pulling them back from the brink if they’ve reached it — can sometimes be a matter of simple preparation. For anyone who has flirted with suicide, Draper recommends putting together a safety plan that can be used in a time of crisis — a list of friends, family members and professionals to contact for help, as well as reminders of self-calming activities or short-term distractions that have worked in the past. Keeping the instruments of self-harm out of reach is important too. About 60% of the 33,000 gun deaths in the U.S. each year are suicides.

Making psychotherapy more widely available can help as well. Roughly 60% of the people who need mental health services in the U.S. each year do not get it, often beause of the stigma of seeking help, though just as often because of lack of insurance. The Affordable Care Act is changing that, with requirements that all policies cover mental, not just physical illnesses.

Early detection of people prone to suicide could make a difference, and one finding earlier this summer revealed that a gene known as SKA2, which is abundant in the prefrontal cortex, may play a role in helping people manage negative feelings and contain impulsive behavior — both important brakes on suicidal behavior. Handily, the gene produces blood markers that indicate its level of activity, providing a quick way of diagnosing potential problems long before they start. Talk therapy is important too, and medications may be an important adjunct, though just which drug is best depends on just which patient is being treated — antidepressants for the depressive, mood stabilizers for the person with bipolar disorder.

As with any deadly disease, of course, there is nothing certain about who will be lost to suicide and who will not. Williams himself seemed to understand the knife edge on which such mortal matters balance. In a 2006 TV interview, after completing two months of treatment for a relapse into alcoholism, he described how easy it is for a former drinker to pick up the bottle again. “It’s the same voice that … you’re standing at a precipice and you look down, there’s a voice and it’s a little quiet voice that goes, ‘Jump.’” This week, in his own way, Robin Williams jumped — and a little bit of all of us went with him. 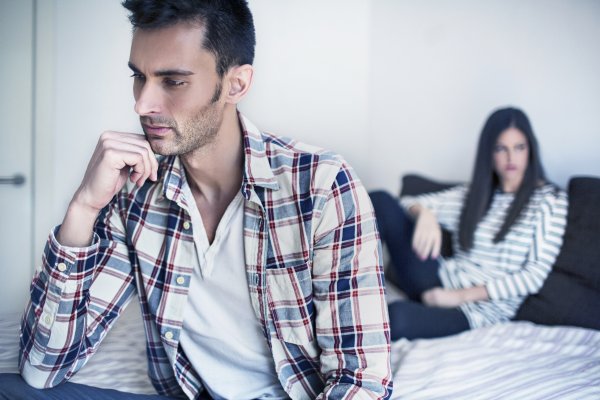 10 Things That Can Predict Whether Your Spouse Will Cheat on You
Next Up: Editor's Pick