A Palestinian man looks at heavy destruction during a 72 hours cease-fire in Al Shaaf neighborhood of Gaza City on Aug. 11, 2014
Alessio Romenzi for TIME
By Ilene Prusher / Jerusalem

Almost three decades ago, Benjamin Netanyahu was the editor of a new book called Terrorism: How the West Can Win. He was then Israel’s Ambassador to the United Nations, and the 1986 book was part of the doctrine he was developing for himself and for Israel: We don’t negotiate with terrorists.

Today Israel’s negotiators are in Cairo, where they’re engaged in indirect negotiations with the militant group Hamas—as well as other Palestinian factions—in an effort to reach a cease-fire agreement to end more than a month of war in Gaza. The stakes are high, with the latest temporary cease-fire set to expire Wednesday night. The talks are part of the search for an exit strategy from Operation Protective Edge, which Israel launched on July 8 in response to a barrage of rocket fire from Gaza. Hamas says it acted in retaliation for the arrests of its activists in the West Bank. But the very fact that Israel and Hamas are participating in a version of proximity talks—where the parties don’t sit in the same room but are close enough for a mediator to facilitate negotiations—shows how far both sides have come from their hardline positions.

Israel has made its stance clear: It will not negotiate with Hamas, which both Israel and the U.S. view as a terrorist organization. Hamas, for its part, doesn’t recognize Israel and calls in its charter for the destruction of the Jewish State, but has recently offered a 10-year truce, an idea that dates to the time of the Prophet Mohammed.

And yet, the two sides are talking, albeit indirectly.

Netanyahu, now Israel’s Prime Minister, has continued to emphasize that Israel sees Hamas as a force to be ostracized—in the same category as ISIS or Boko Haram, he told foreign reporters last week. Even the most pro-peace member of Netanyahu’s cabinet, Tzipi Livni, said earlier this week that giving in to Hamas’ demands would be “a signal of weakness” that would only encourage yet another round of fighting. “Nobody can afford to send a message to Hamas that those who act with terror towards civilians can get what they want,” Livni told reporters.

Rhetoric aside, though, Israel has found itself faced with two basic choices, says Dr. Jonathan Spyer, a senior research fellow at the IDC Herzilya, a university near Tel Aviv. Either continue with its military campaign, with an eye toward toppling Hamas and possibly re-occupying Gaza—a move bound to engender intense international censure as well as soaring casualty counts—or negotiate with the very people Israel says no one should recognize as legitimate. Netanyahu, Spyer notes, has decided not to go the route of regime change by force, despite pressures from hard-liners to do so. As such, there is nothing to do but to negotiate over the terms.

“If Israel decides that it’s not going to try to destroy Hamas, [it] then [has] to deal with this semi-sovereign enclave between Israel and Egypt, and you end up with a situation of ongoing conflict with a neighboring entity: a situation of no peace but now war, or maybe a war of attrition,” Spyer tells TIME. To let the war drag on indefinitely, he notes, would also be seen in Israel as a failure.

“If the Israeli communities on the border of Gaza become ghost towns, then we have a de facto disengagement from the south of Israel, and I don’t think any Israeli prime minister wants that,” he said.

The majority of Israelis who live in communities that surround the Gaza border, which have borne the brunt of more than 3,500 rocket and mortars fired at them from Gaza over the past month, have been seeking shelter in the center and north of the country. If Netanyahu wants to make good on his pledge to “bring back quiet,” there is no way to get there without doing business with Hamas.

While some analysts commend Netanyahu’s decision to choose cease-fire talks over further military action, he has also come under criticism. Writing in the New York Times, military analyst Ronen Bregman argued that the war has done “significant damage” to Israel’s deterrence. “And as much as Israel is seeking to marginalize Hamas and empower the weakened Mr. [Mahmoud] Abbas, Hamas is, for the first time in its history, on the verge of being internationally recognized as an equal party in the Israeli-Palestinian dispute,” Bregman writes.

Zvi Bar’el, a writer for the left-wing Haaretz daily newspaper, said Netanyahu’s policies have painted Israel into a corner, forcing it to negotiate with Hamas. “Israel’s insistence on viewing the Palestinian unity government as a ‘terrorist entity,’ or at the very least ‘a Hamas government,’ has actually trapped it, and once again forced it into negotiating with Hamas and Islamic Jihad while pushing Abbas into the position of an observer who is not authorized to sign an accord, should one be reached,” Bar’el writes. The end result will likely be to revive Hamas’ popularity, he predicts.

Mark Heller, an analyst at the Institute for National Security Studies at Tel Aviv University, says the international censure coming down on Israel has steered the country’s leadership away from rhetoric around destroying Hamas, choosing a negotiated solution instead. “Israel has the ability to reoccupy Gaza and destroy Hamas, if it’s willing to pay the price, but one of the prices is the lives of troops and Israel’s international standing,” Heller says. “As Hamas still has effective control of Gaza and decides whether or not there will be firing from Gaza, the only way to pursue the possibility of a cease-fire is to speak with them.”

The latest 72-hour truce, meanwhile, expires Wednesday night—and it’s far from certain that the gaps between the two sides will be bridged before then. 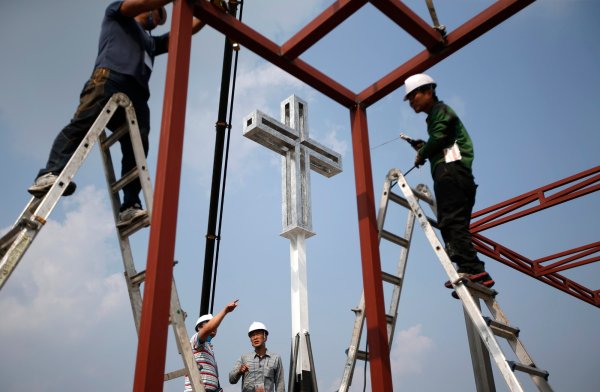 Behind the Pope's Trip to South Korea
Next Up: Editor's Pick