Outside the Marin County home where Robin Williams was found on Monday after taking his own life, fans and friends had left about a dozen memorial bouquets by Tuesday morning. Some brought closed notes addressed to “Robin.” Others wrote their messages out in the open, like one on a pink, heart-shaped piece of paper that reads: “You’ll be missed! xoxo.”

One of the locals who came by to pay their respects was Agne Correll, the owner of an art gallery in nearby Mill Valley, which Williams had frequented. She brought flowers and her 7-year-old son — whom she said she wanted to teach the tradition of paying respects after someone from your community dies. “I didn’t know [Williams] personally, but I felt like I did. We all feel like we’ve been in his life,” she said of those who lived nearby in the area, which is north of San Francisco.

“‘O Captain, my Captain.’ I will never forget,” Correll said.

Others who knew the comedian and actor, whether as an occasional customer or as a dear friend, describe a humble fixture in the community who didn’t want to be treated like a celebrity. He would pedal his bike around the surrounding neighborhoods and stop at little shops to flip through CDs, they report — the kind of casual shopping an A-list celebrity could easily do on a computer at home instead, if one wanted to avoid the public eye.

Residents also remember Williams as someone who would never bark at the fan who stared at him or asked for a picture. He was, by all accounts, an American icon who was willing to lend his famous name to any local cause he could help.

“He was so beloved by the community,” said Louise Satterfield, who works at Two Neat, a shop in Mill Valley that Williams patronized. Tears welled in her eyes as she recounted a time they were talking about a Southern rock band named Little Feat, and how appreciative he was when she remembered to tell him their CD had come in.

“I knew it was going to be sad to come in here and see that music section,” she said. “We’re going to miss out on so much. But we have what he left us, which is genius.” After news of his death, the store quickly sold out of all Williams’ comedy albums.

Williams moved to Marin County when he was 16, and was voted “funniest,” as well as “least likely to succeed” by his peers. He studied theater at Marin College and was a lifelong fan of the San Francisco Giants, sometimes rooting for them via a microphone in front of the crowd, riling them up by tweaking one of his most famous movie lines: “Gooooooood evening, San Francisco!” The team also issued a statement after news of his death spread on Monday, lamenting that they lost “one of our greatest fans.” It’s no accident that they expressed condolences both to his family and “the entire community.”

Some locals, like employees at a bike shop where the avid cyclist would shop, refused to speak to the press except to say that Williams was a quiet man who didn’t want publicity. While he may have been a star, he was, to many here, a patch in the town tapestry. One friend of the family referred to the media attention accompanying his passing as “disgusting” and “gross,” an exploitation not of a public happening but a dearly personal, tragic event that befell one of their own. To many, the news coverage looked uglier in Marin County than it does in Manhattan or Los Angeles.

Microphones are piled high at the press conference to address the death of Robin Williams, held in San Rafael, Calif., on the morning of Aug. 12, 2014.
Katy Steinmetz for TIME

Almost every Tuesday, Williams would cross Highway 101, traveling from his home in Tiburon to the neighboring suburb of Mill Valley, to attend the weekly comedy night at the Throckmorton Theatre. On Tuesday this week, the board that would otherwise have announced what was showing had been erased and read simply: “Robin Williams.” More often than not, the Oscar-winning actor was in the green room, rather than onstage, encouraging young comedians, says the theater’s marketing director Julian Kaelon.

On Tuesday this week, the venue owners canceled Throckmorton’s comedy night for the first time in 10 years. They would run a show on Christmas if it happened to fall on a Tuesday, Kaelon says — but not today.

Throckmorton’s doorstep was also lined with flowers on Tuesday. A staff member put on a record of Gregorian chants, as locals wrote notes to the actor on a piece of cardboard taped over a glass poster box. Michael Jeung brought yellow roses and water in a mason jar, which he poured into an antique bowl where he had placed a single gardenia.

“I wanted to bring something that lasted a while and that was a little sweet, because he was so sweet,” Jeung said, recalling a time he helped divert one of Williams’ more insistent fans — an act the comedian heartily thanked Jeung for the next time they met.

Pilgrims to Throckmorton would walk under a big, circular painting on the ceiling outside the theater, a skyscape showing stars that shine bright enough at night to turn the clouds light yellow. The painting is by Williams’ widow, Susan Schneider, an artist who became his third wife in 2011 and who is also a respected resident of the town.

Caroline de Lone walked under the painting clutching a box she brought from the bakery where she works, Beth’s Community Kitchen. “He was like a ball of sunshine,” she said. Her mother, Lesley, agreed: “He was a local. Everyone loved him. He was completely unspoilt.”

The baked goods were not for the memorial but for the executive director of the theater, Williams’ close friend Lucy Mercer. In a statement, Mercer asked people to remember Williams this way:

While some gave hugs in Marin County, many also turned to flowers. By Tuesday evening, the dozen bouquets outside Williams’ house had turned into nearly 100. Behind them, two statues of monkeys flanked the walkway leading to the front door, as they had before the tragedy but perhaps with new significance. The sentries’ small, stone faces were frozen in toothy, permanent smiles, and their hands held instruments just in front of their lips, forever almost ready to amuse the next passersby. They were playful and grotesque, fitting symbols for the day after the world had to face the loss of a sad man who made so many people happy. 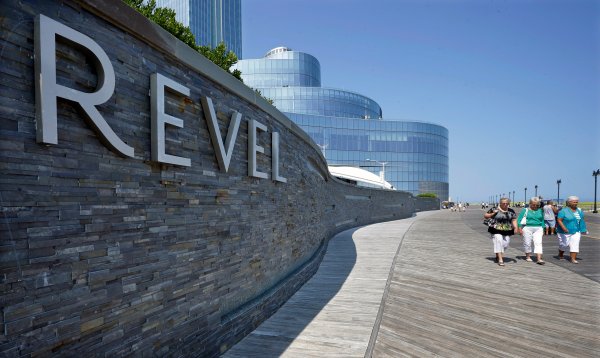 Donald Trump Isn't the Only Loser in Atlantic City
Next Up: Editor's Pick