Mystery of Who Placed White Flags on the Brooklyn Bridge Solved

A white flag flies atop the west tower of the Brooklyn Bridge, in New York City, on July 22, 2014
Richard Drew—AP
By Denver Nicks

Two Berlin-based artists have taken credit — and provided evidence to back up their claim — for swapping out two giant American flags over the Brooklyn Bridge earlier this summer and replacing them with all-white versions.

After the flags suddenly appeared over the bridge on July 22, numerous people rushed to claim credit for the stunt. But German artists Mischa Leinkauf and Matthias Wermke have produced videos and pictures apparently taken from the Brooklyn Bridge that indicate they were, in fact, the culprits, the New York Times reports.

Many in New York City saw the flag stunt as a security breach, and embarrassed authorities rushed to launch an investigation. But Leinkauf and Wermke say they were shocked that the flags were perceived that way. Their actions weren’t supposed to be provocative, they said, but merely intended to celebrate “the beauty of public space.” They pulled off the caper on the anniversary of the 1869 death of John Roebling, the German engineer who built the bridge.

“We saw the bridge, which was designed by a German, trained in Berlin, who came to America because it was the place to fulfill his dreams, as the most beautiful expression of a great public space,” Leinkauf said. “That beauty was what we were trying to capture.”

The pair said that between 3 a.m. and 5 a.m. on July 22 they carried the homemade white flags in backpacks while climbing the cables to the top of the bridge, where they replaced the American flags with the all-white versions. They did not see security cameras. They ceremonially folded the American flags, they said, and promise to return them. 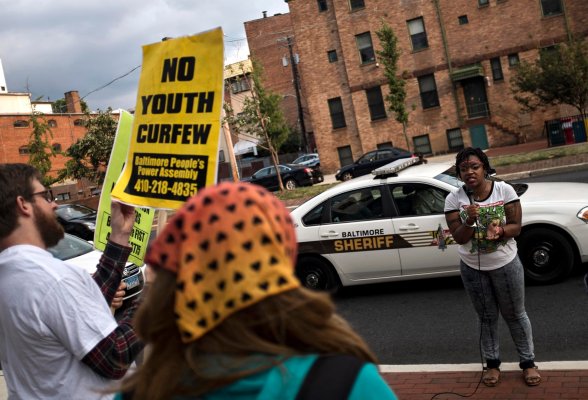 Baltimore Tightens Curfew Amid Skepticism and Protests
Next Up: Editor's Pick