Hillary Clinton Wants to 'Hug It Out' With Obama

President Barack Obama and former Secretary of State Hillary Clinton will attend a birthday party Wednesday evening in Martha’s Vineyard, just as their relationship is hitting its lowest point since the 2008 Democratic presidential primary. But Clinton hopes to use the occasion to put a fresh controversy over their foreign policy disagreements behind them, with a spokesman saying “she looks forward to hugging it out” with the commander-in-chief.

Clinton and Obama are slotted to attend an 80th birthday party for Ann Dibble Jordan, the wife of former National Urban League president and CEO Vernon Jordan, at an exclusive country club on the island where Obama is vacationing. The meeting follows Clinton’s critique of Obama published in the Atlantic this week. “Great nations need organizing principles, and ‘Don’t do stupid stuff’ is not an organizing principle,” Clinton said, looking to distance herself from the President ahead of a possible 2016 White House run. White House aides use the more profane version of the phrase “Don’t do stupid stuff” to summarize Obama’s foreign policy vision for reporters.

Obama confidant David Axelrod fired back at Clinton on Tuesday, bringing up her support for the 2003 invasion of Iraq. “Just to clarify: ‘Don’t do stupid stuff’ means stuff like occupying Iraq in the first place, which was a tragically bad decision,” he wrote on Twitter.

Clinton called Obama on Tuesday in an attempt to clear the air before their meeting, Clinton spokesman Nick Merrill said. The flareup highlighted the challenge facing Clinton as she seeks to differentiate herself from a president of her own party, and the limits to which she can break with him without alienating Democratic supporters of Obama.

“Secretary Clinton was proud to serve with President Obama, she was proud to be his partner in the project of restoring American leadership and advancing America’s interests and values in a fast changing world,” Merrill said. “She continues to share his deep commitment to a smart and principled foreign policy that uses all the tools at our disposal to achieve our goals. Earlier today, the Secretary called President Obama to make sure he knows that nothing she said was an attempt to attack him, his policies, or his leadership.

“Secretary Clinton has at every step of the way touted the significant achievements of his Presidency, which she is honored to have been part of as his Secretary of State,” Merrill added. “While they’ve had honest differences on some issues, including aspects of the wicked challenge Syria presents, she has explained those differences in her book and at many points since then. Some are now choosing to hype those differences but they do not eclipse their broad agreement on most issues. Like any two friends who have to deal with the public eye, she looks forward to hugging it out when she they see each other tomorrow night.” 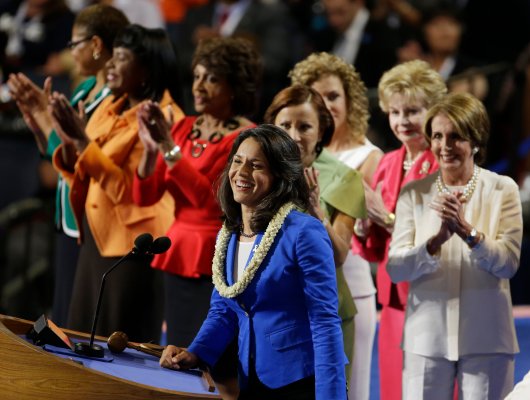 Two Charts That Show How Women Leaders Trail Men At Ballot Box
Next Up: Editor's Pick