An Army Suicide Widow Remembers Robin Williams With a Smile

Robin Williams wears a camouflage jacket while entertaining a cheering crowd of US troops as part of a United Service Organiztions (USO) Holiday Tour at the International Airport in Baghdad, Dec. 16, 2003.
Mike Theiler—EPA
By Leslie McCaddon

I remember running through the house, quickly opening a bedroom door to make sure my husband wasn’t choking or having a stroke. His screams and squeals could be heard throughout our entire place.

I found him, lying on the floor, in front of the TV gasping for air. On the screen above him was a paused image featuring Robin Williams’ face screwed up in a comedic expression. My husband was laughing and coughing, desperately wiping tears from his eyes.

He rewound to the start of the segment. Robin Williams was making fun of Scotland. And educating the audience. About golf. I don’t know if it is his accent, the reckless and wild use of the f-bomb, or simply the fact that he hits the nail completely on the head, but before long our three children were coming to make sure their parents weren’t choking. Or having a stroke. A stroke. Get it?

It was only a few years later that my laughing, hysterical husband would succumb to the same illness that Robin Williams did Monday. From the beginning, I have chosen to be honest about my husband’s struggle with depression, and his eventual death by suicide. As the news broke about Williams’ death Monday, my heart broke for his family. And for him.

You see, my husband Mike was funny, too, and often laughing. He saw the humor in the mundane and he could disarm those around him with humor.

Robin Williams is one of those actors that made us believe. He made us believe he was a teacher, a therapist and Peter Pan. He made us believe that if you just paid attention, this world was something to be open to, armed with laughter. I think it’s fair to say that until Monday night, when most of us talked about him, we didn’t discuss his struggle with addiction. I’m betting we never paused to wonder if it was rooted in anything other than fame.

We never stopped to ponder whether this heartfelt, hilarious man was battling depression. That’s why I’m grateful for the expert on CNN who kept referring to the “brain disease” that took Robin Williams’ life.

Since my husband died in March 2012, I’ve worked hard to remind people that untreated depression can kill. And depression does not always announce itself to friends, neighbors, co-workers and fans. Depression can be a silent killer—with often only a family member or two struggling to find the right balance of love and medical support to help their loved one through.

Robin Williams has left me with one final smile. Because of who he was, because of what he meant to so many and because he was one of the finest entertainers to ever walk this planet, Robin Williams has broken through the stigma surrounding depression and suicide. There hasn’t been a global rush to judgment. I’ve (thankfully) yet to hear a single person refer to his choice as “selfish.”

Rather, there has been an overwhelming international response to his death as tragic—as the result of a disease. And as a great loss to those of us who already miss him. Just as I pictured my husband “on the other side,” baffled to discover how treasured he was by so many loved ones, friends and co-workers, I also picture Mr. Williams with tears in his eyes to discover that he was loved by the whole world. I just wish we’d had the chance to do more for him.

Today, I plan to curl up in front of the TV and remember two men who managed to capture my heart and make me laugh until someone had to come check on me. You are both loved. You are both missed. And we will continue to learn and grow in our understanding of how to treat depression because of both of you. Rest in peace, and laughter, Mr. Williams.

Please, if you, or someone you love, are depressed or thinking of ending your life for any reason, reach out. Call the National Suicide Prevention Lifeline at 1-800-273-TALK. You will not be judged. You deserve to know you are loved.

Leslie McCaddon, the widow of Army Captain Michael McCaddon, is a mother of three and lives in Arizona. 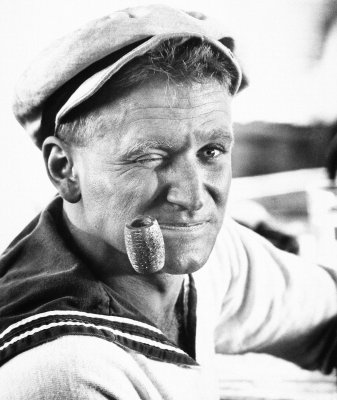