8 Facts You Might Not Have Known About Robin Williams

Robin Williams, left, and Christopher Reeve, attempt to hail a taxicab in New York City on Feb. 9, 1981. Williams went to see Reeve, who is appearing in the play "The Fifth of July", backstage after his performance Friday night.
Steve Sands – AP
By Olivia B. Waxman

In light of the death of Academy Award–winning actor Robin Williams at age 63, NewsFeed rounds up some fun tidbits you might not have known about the comedic genius.

• He was a gamer. During a Reddit AMA in September 2013, a Redditor asked him if he named his daughter Zelda after the video game The Legend of Zelda. Williams said, “It wasn’t actually me, it was my son Zachary who came up with the idea. But once Marsha [his ex-wife] and I heard it, we said it was great.” Williams also said he’s been playing Call of Duty, The Legend of Zelda: Ocarina of Time, Portal and Battlestations Pacific.

• Williams’ favorite book growing up was The Lion, the Witch and the Wardrobe by C.S. Lewis.

• Christopher Reeve was Williams’ roommate and best friend at Juilliard. The comedian was the first person who made the Superman actor laugh a few days after he was paralyzed in a riding accident. ”He announced that he was a proctologist and had to examine me immediately,” Reeve wrote in his memoir Still Me, according to a New York Times review. “And for the first time since the accident I laughed.”

• Williams got angry with Disney for using his voice as the Genie in Aladdin to sell merchandise for the movie because “I don’t want to sell stuff. It’s the one thing I won’t do,” he told New York magazine. Disney attempted to make up for it by sending him a Picasso painting, believed to be worth $1 million, in which the artist imagined himself as Vincent van Gogh.

• When Williams was first starting out, he performed as a mime outside New York City’s Metropolitan Museum of Art to make money.

• Williams owned a vineyard in California, which, he joked in a TIME “10 Questions” interview, is “weird,” like “Gandhi owning a delicatessen.”

• In a 1979 TIME cover on his rise to fame as Mork in ABC’s Mork & Mindy, Williams said he was going to stick to driving his 1966 Land Rover as opposed to a flashier car like a Mercedes or a Rolls-Royce because “I can’t deal with new cars. I like a car that’s like me — you never know what’s going to happen next.” 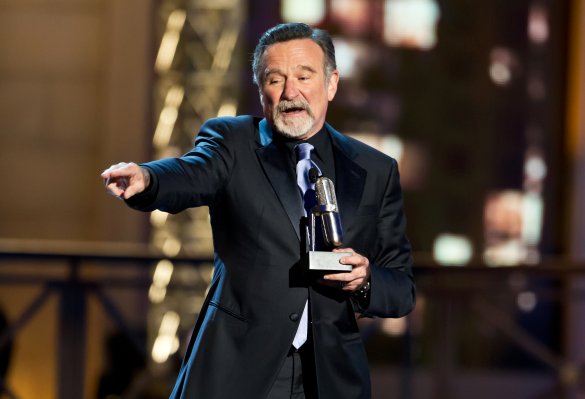 Watch Robin Williams' Funniest Moments From That Time He Was on Whose Line Is It Anyway?
Next Up: Editor's Pick