U.S. actor Robin Williams posing for photographers during a photo-call in Rome on Nov. 15, 2005.
Alessia Pierdomenico—Reuters
By Melissa Locker

“Comedy is acting out optimism,” Robin Williams is supposed to have said. That quote may be true or apocryphal, but as a comedian who became an Oscar-winning actor, he would know.

While Williams became better known as an actor, stand-up was his entrée into life on stage. His sets were fierce and fearless and wildly spontaneous, veering away from established routines at the drop of a hat, or the sight of a pocket camera, into new, hilarious territory. His jokes ranged from the oddball (“Do you think God gets stoned? I think so … look at the platypus”) to the quotidian (“The first time I tried organic wheat bread, I thought I was chewing on roofing material”) to the political (“You could talk about same-sex marriage, but people who have been married say ‘It’s the same sex all the time'”) — and he tackled all of them with the same sense of ease.

Here is a small sampling of Williams’ manic-comedic genius and the many ways he had to make people laugh:

The Roast of Richard Pryor (1977)
Back when Williams was just starting out in the comedy circuit, the venerable Richard Pryor hired him for the short-lived The Richard Pryor Show. The show marked its final episode with a roast of Pryor and even though he was new on the scene, Williams stepped up to the challenge — he even managed to get Pryor to laugh.

Weapons of Self-Destruction (2009)
Politics, politicians and more politics were on the menu for this show, but Williams also touched on technology (“Is it rude to Twitter during sex?”) and his struggle with addiction (“I went to rehab in wine country, just to keep my options open”).

At the Roxy (1978):
One of his earliest sets is marked by a brilliant familiarity with his audience (“Oh, no, everyone I’ve ever known! There are people here I’ve slept with twice!”) and a knack for disarming candor and openness (“Cause you’re only given a little spark of madness, and if you lose that, you’re nothing”).

On Johnny Carson (1981 and 1992)
Johnny Carson could barely stop laughing during Williams’ first visit to the venerable stage — and Williams wasn’t even doing a set, he was just a guest on the show.

In 1992, when Carson was about to retire, he invited Williams back for one final set. He did not disappoint:

An Evening With Robin Williams (1982)
While many of Williams’ tried-and-true routines were included in the set, it was his spontaneous riffs that won the day, despite possibly confusing the audience. (“Right now people are going: ‘What the hell is he doing now?!’ Hahaha … catch up!”)

An Evening at the Met (1986)
Williams candidly talked about cocaine in this set, including helpful pointers as to whether or not you have a cocaine problem (“If on your tax forms it says: “50,000 dollars for snacks! MAY DAY!”):

On the USO Tour (2007)
“I’ve never had an entire audience just go, forget you!” said Williams, who was a fixture on the USO circuit, after an unexpected turn of events during a USO tour in Kuwait.

Inside the Actors Studio (2001)
Williams spoke candidly about how the death of his friend John Belushi and the birth of his son led him to quit drugs. “Was it a wake-up call?” he said. “Oh yeah, on a huge level. The grand jury helped too.” Then he turned the staid studio into an improv stage, riffing on a borrowed scarf. 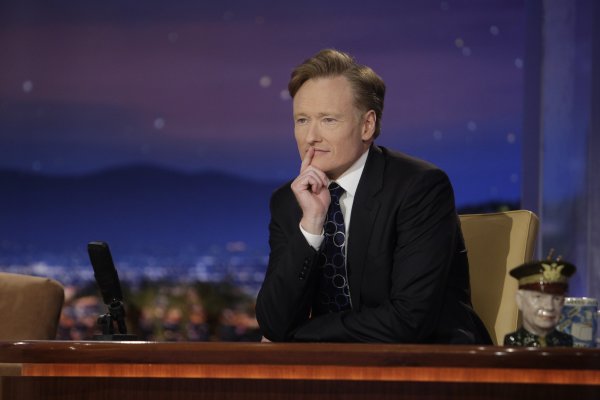 Conan Stuns Audience With News of Williams' Death
Next Up: Editor's Pick