President Barack Obama hinted at the possibility of an upcoming vacancy on the Supreme Court Monday during a fundraiser for Senate Democrats.

Speaking to a group of donors to the Democratic Senatorial Campaign Committee on a break from his vacation in Martha’s Vineyard, Obama said he needs Democrats to hold a majority this year to fill vacancies to the high court.

“What’s preventing us from getting things done right now is you’ve got a faction within the Republican Party that thinks solely in terms of their own ideological purposes and solely in terms of how do they hang on to power,” Obama said. “And that’s a problem. And that’s why I need a Democratic Senate. Not to mention the fact that we’re going to have Supreme Court appointments, and there are going to be a whole host of issues that many people here care about that are going to be determined by whether or not Democrats retain the Senate.”

It was not the first time Obama has tied the Supreme Court to the midterm elections, but it was the first time Obama has explicitly suggested there would be a vacancy in his final years. Two of the Court’s left-leaning justices, Ruth Bader Ginsburg and Stephen Breyer, 81 and 75 respectively, have been facing calls from Democrats to step aside before Obama leaves office in 2017 to ensure that their seats remain occupied by liberals in the event Republicans regain the White House.

Ginsburg brushed aside calls for her retirement last month in an interview with Yahoo News’ Katie Couric. “All I can say is that I am still here and likely to remain for a while,” she said. Ginsburg has twice been treated for cancer while on the bench.

Obama successfully nominated Justices Elena Kagan and Sonia Sotomayor to the Supreme Court in his first two years in office. If Democrats lose the Senate this November, Obama would find it nearly impossible to get a Supreme Court nominee with a liberal bent confirmed. 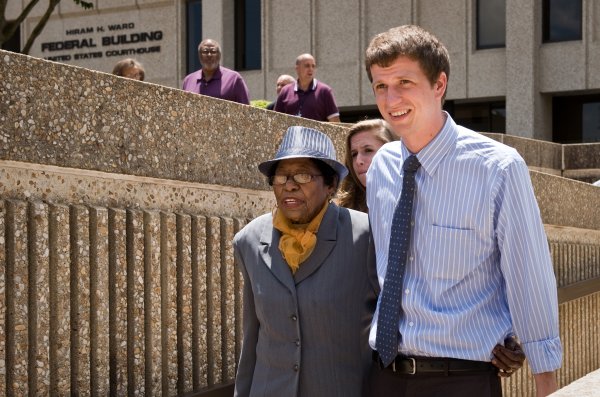 North Carolina Voting Law Will Hold During Midterms
Next Up: Editor's Pick