Lesley McSpadden, the mother of 18-year-old Michael Brown, wipes away tears as Brown's father, Michael Brown Sr., holds up a family picture of himself and his son during a news conference on August 11, 2014, in Ferguson, Mo.
Jeff Roberson—AP
By Kristina Sauerwein and Maya Rhodan

As the parents of an unarmed black teenager who was fatally shot by police in a St. Louis suburb publicly appealed for justice, the FBI opened a civil rights inquiry and Attorney General Eric Holder promised a “thorough, fair investigation” into the shooting that has erupted into a national debate.

“I just wish I could have been there to help him,” Lesley McSpadden, the mother of 18-year-old Michael Brown, said at a news conference in Ferguson, Mo. Monday. She broke down crying as she spoke, an enlarged photo of her firstborn in her hands.

“He was funny, silly, he could make you laugh.. He was a good boy, he didn’t deserve none of this,” his father, Mike Brown Sr., said. “We want justice for our son.”

The shooting has sparked outrage in Ferguson, a predominantly African-American city of some 21,000 people northwest of St. Louis. Sunday night protests led to violence, with several local businesses damaged in looting and unrest. Tempers continued to flare Monday, with police using tear gas and rubber bullets to disperse crowds that gathered the site of a convenience store burned the night before, according to the Associated Press.

Earlier in the day, members of Brown’s family tried to dissuade protesters from turning to violence.

“Why would you burn your community?,” Lesley McSpadden, Brown’s grandfather, said. “Why? This should not be his legacy.”

Attorney Benjamin Crump said the family wants a full investigation into the death of the teenager, who was killed Saturday afternoon in an altercation with police. “I don’t want to sugar coat it, their baby was executed in broad daylight,” Crump said. “Our children deserve the dignity and respect of law enforcement when they’re walking down the street.”

Authorities said there was a struggle over an officer’s weapon, though witnesses have disputed that account. St. Louis County Police Chief Jon Belmar said Monday that an autopsy showed Brown had been struck by multiple gunshots. The location of the bullets has not been disclosed. Officials have said they will reveal the identity of the officer who shot Brown by Tuesday afternoon.

“These parents know in their heart, and they reject what the police department said how this played out,” Crump said.

Holder promised Monday that the incident would receive a “fulsome review,” with the FBI and the Justice Department’s Civil Rights Division working in conjunction with local officers. “The federal investigation will supplement, rather than supplant, the inquiry by local authorities,” Holder said in a statement. “At every step, we will work with the local investigators, who should be prepared to complete a thorough, fair investigation in their own right.”

Brown’s shooting is the latest recent, high-profile incident of an African American dying at the hands of police. On Aug. 5, a 22-year-old holding a BB gun inside an Ohio Walmart was fatally shot by officers after allegedly failing to drop the weapon. Last month in New York City, Eric Garner died mid-arrest after allegedly being placed in a chokehold by police officers responding to a nuisance call. And the death of Trayvon Martin, the unarmed Florida teen who was fatally shot by a neighborhood watch volunteer in 2012, continues to reverberate. Crump represented Martin’s relatives and said Monday that the teen’s father, Tracy Martin, reached out to Brown’s family.

Missouri lawmakers, meanwhile, called for a “transparent understanding” of the events that led to Brown’s death.

“As a mother, I grieve for this child and his family,” Democratic Senator Claire McCaskill said in a statement. “I pray that the wonderful, hardworking, and God-loving people of Ferguson will find peace and patience as we wait for the results of what will be numerous and thorough investigations of what happened.”

Republican Senator Roy Blunt said in a statement Brown’s recent graduation from high school “should have been a beginning of better things. Everyone deserves a transparent understanding of what happened here.” 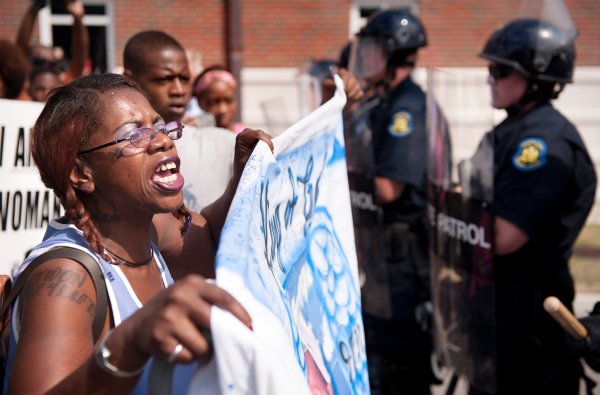 FBI to Probe Police Shooting of Unarmed Missouri Teen
Next Up: Editor's Pick