My car’s in-dash navigation system did me wrong a few months back, sending me on a wild goose chase around the greater Boston area.

In a fit of despair, tears and anger-sweat, I finally relented, pulled over and used an ever-updated GPS app on my phone, which pointed me in the right direction in less than a minute.

Not long after, my car was due for one of its 10,000-mile checkups, at which point I asked the dealership to update the GPS software with the newest routes. Should be free, right? It’s not. They wanted $200. Give me an hour and I can make you a list of 100 things I’d rather spend $200 on.

What I could do is spend a measly $20 or less on a smartphone mount for my car, but that solution feels equal parts inelegant and unsafe, with all the docking and unlocking and app poking and whatnot.

I’ll admit to being intrigued by upcoming efforts from Apple and Google to more deeply integrate my phone into my car’s infotainment system, but this Navdy doodad looks pretty interesting as well. It’s basically a projection system that sits on your dash and beams a transparent interface onto your windshield.

It’s compatible with Apple and Android phones, and taps into Google’s Maps app to display turn-by-turn directions near your line of sight. You can also make and take calls and respond to notifications — tweets, text messages and the like — with simple gestures (thumbs up to answer a call, left and right swipes to navigate) and voice commands. It lets you control music apps as well, and there are no monthly fees to use any of the features. The GPS system is always updated, in other words.

It’ll be available early next year, with pre-order pricing set at $299 until early September of this year. The regular price will be $499. That’s expensive, yes, but I like the idea of being able to take it quickly from car to car (I have 13 cars*). And just a quick note that the company is using a Kickstarter-like pre-funding system wherein it collects the money from pre-orders to help fund the production of the product. The whole “early next year” thing could be a moving target.

Here’s a demonstration video of the Navdy in action:

*We actually only have one family car, and my wife drives it most often. But imagine if we had 13! 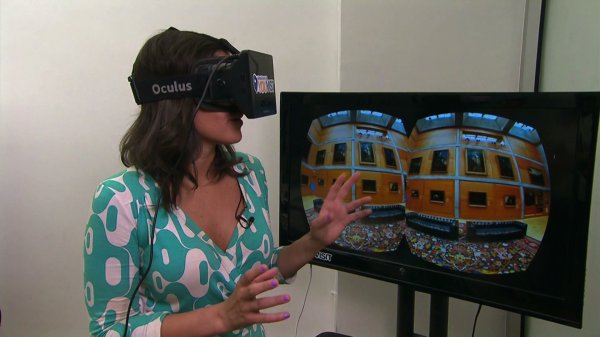 Now You Can Tour Colleges Using a Virtual Reality Headset
Next Up: Editor's Pick