Haunted Empire: A Bad Book About Apple After Steve Jobs

Haunted Empire: Apple After Steve Jobs, former Wall Street Journal Yukari Iwatani Kane’s new work, may be a business book — but as its name suggests, it’s also a ghost story. The empire in question is the fabulously successful company Jobs left behind when he died in 2011. And it’s Jobs doing the haunting, by being a still-iconic, impossible-to-replace role model for his successor as CEO, Tim Cook, who Kane portrays as a fumbling, uninspiring number-cruncher.

Kane seems to be in love with the metaphor: The spectral Jobs keeps making return appearances, looming over Cupertino as the Ghost of Apple Past. Back in the real world, Cook is so nonplussed with the book and its portrayal of Apple that he was moved to give CNBC a statement dismissing it as “nonsense.”

(Apple bristling at an unflattering book, incidentally, isn’t new or un-Jobslike. In 2005, it reacted to John Wiley & Sons’ plans to publish a stinging biography of Steve Jobs by pulling all of the publisher’s tomes from its stores, thereby giving the bio a priceless jolt of free publicity. This time around, it doesn’t seem to be conducting a similar boycott: You can buy Haunted Empire from Apple’s own iBooks store.)

Of course, there’s no scenario in which Apple would shower praise on an even mildly critical book about itself. But when Cook says that Haunted Empire “fails to capture Apple, Steve, or anyone else in the company,” he happens to be right.

In an author’s note, Kane says that Haunted Empire is based on five years’ worth of reporting on Apple (including her time at the WSJ) and more than 200 interviews. To be sure, there are moments when the breadth and depth of her research pay off nicely. Some tidbits are new — at least to me — such as the details of Steve Jobs and New York Times columnist Joe Nocera wrangling over the latter’s commentary on Jobs’ health. The best, most vividly-reported extended sections are the chapters on Apple’s Taiwanese contract manufacturer, Foxconn; if Kane wrote a book entirely on that topic, I’d look forward to reading it.

But the closer she gets to the book’s conceptual nub — that Tim Cook’s Apple has created one disaster after another for itself — the shallower the story gets. That’s not entirely Kane’s fault: Any writer trying to go behind the scenes at Apple is automatically hobbled by the fact that the company grants few on-the-record interviews, and usually not in situations which require it to deal with unhappy subjects head-on. Still, there are plenty of instances in which I was hoping for more insight on an Apple mishap — such as the iOS 6 Maps meltdown or the company’s brief, inexplicable decision to entrust the Apple Stores to John Browett, the CEO of a famously cheesy chain of British electronics stores — and didn’t get much that hadn’t already been widely covered elsewhere.

In some respects, Haunted Empire would have been a better, more convincing book if there were less of it. Kane’s bashing of the original version of Siri — which, though imperfect, doesn’t strike me as having been a fiasco for Apple — is particularly long and overwrought. And when she wants to show that Cook’s hometown was really small, she provides 10 examples of small-town stories covered by its newspaper, when one or two would have made the point. There are also some odd small errors I’m surprised weren’t caught by editors, such as a reference to Queen Elizabeth II’s only female offspring, Princess Anne, as the monarch’s “eldest daughter.”

Kane doesn’t dismiss all evidence of Apple’s post-Jobs successes: There’s mention of popular products and profitable quarters. But she doesn’t find space to acknowledge the biggest financial triumphs. When Apple’s market capitalization passes Exxon’s in August 2011, she gives it a paragraph but doesn’t explain that this victory made Apple not just more valuable than Exxon, but the most valuable company in the world, period. Nor did I find any nods to the fact that Apple has continued to collect the vast majority of the smartphone industry’s profits even as its market share has shrunk — a data point that would tend to suggest Apple has outfoxed the competition rather than being trounced by it.

Again and again, Kane paints a picture in which there’s no such thing as news that doesn’t indicate Apple is in trouble. In Haunted Empire, as Macworld’s Jason Snell points out, it’s alarming when the cheap iPhone 4s holds its own in sales against the pricier iPhone 5 — and when consumers opt to buy the top-of-the-line iPhone 5s rather than the lower-cost iPhone 5c.

As for Cook, when he shows little emotion in meetings and puts the screws to his employees and suppliers, it’s not a good sign. When team members have enough time to take vacations and Cook thoughtfully avoids intruding upon them…well, that, too, is a bad sign.

Kane also says that the the theories of Clayton Christensen, author of The Innovator’s Dilemma, cogently explain Apple’s alleged downfall in progress. Which is giving the distinguished Harvard Business School professor a huge pass given that — as Kane notes earlier in the book — his original, wildly inaccurate take on the iPhone back in 2007 was that it wouldn’t compete successfully with phones from then-dominant companies such as Nokia.

It’s not just the analysis of Apple’s current state that opts for melodrama over coherence. During an account of Jobs’ 2010 WWDC keynote, when his demo of the iPhone 4 went awry and he asked attendees to get off the Wi-Fi network, Kane asserts that “(m)ost of the audience thought he was joking, even though Jobs’ tone was serious.” An attentive editor might have questioned Kane’s ability to divine the majority opinion of the several thousand people in the room. (I was in the crowd that day, and didn’t think for a nanosecond that Jobs was just kidding around.)

That Kane devotes considerable space to a Steve Jobs demo running off the rails points to a basic flaw in her thesis. In the Jobs era, things went wrong constantly. Products didn’t always live up to expectations. People made fun of Apple’s tendency to over-hype its own accomplishments. Customers were unhappy with one policy or another. Apple keynotes were declared to be disappointments, and the stock market responded to them by selling Apple stock.

In other words, all the stuff that happens today to Cook’s Apple happened to Jobs’s Apple. And while Jobs’ communications skills and personal charisma often helped to paper over problems, anyone who thinks that the company wasn’t subject to constant second-guessing in those days is haunted by a romantic ideal of an Apple that never actually existed. (To pick just one example, Kane trashes the Cook-led WWDC 2013 keynote, but she’s kinder to it than Wired’s Leander Kahney was to Jobs’ presentation at WWDC 2006.)

Jobs didn’t change the world nearly as frequently as Kane suggests, either. True, his Apple unleashed landmark products every few years, in a way that no other technology company has done. In between, though, it released ones that improved incrementally on the landmarks, in exactly the same way that the Cook-era iPhone 5s and iPad Air, both of which Kane describes as disappointments, improve on their predecessors. I’ve argued before that we won’t really know how well Apple will fare in the post-Jobs era until the company enters a whole new category, which makes Haunted Empire feel premature as well as superficial.

At the very end of the book, in an epilogue, Kane compares Apple to Google by contrasting a TIME cover story on Google’s anti-aging initiative and other “moonshot” efforts with a Businessweek cover on Apple. By now, you already know that she doesn’t mean it as a compliment to Apple.

I happen to be the guy who co-wrote that TIME piece, and for the record, I don’t find the juxtaposition between the covers to be a knock on Cook’s Apple in the least. The world is a better place because Google is pursuing far-flung, absurdly ambitious dreams. But that isn’t Apple’s style, and never was. Producing polished pieces of consumer electronics that aspire to greater things than the average gadget — and that often set the agenda for the rest of the industry — is what the company does best. And irreplaceable though Jobs is, it’s continuing — so far — to do a much better job of retaining its mojo than Haunted Empire gives it credit for. 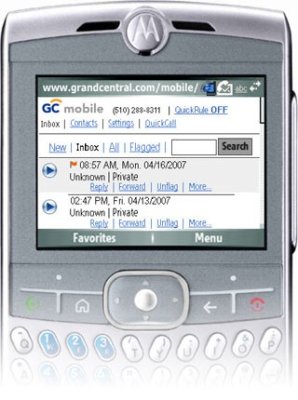 I'm a Google Voice Addict, and I'm Frightened About Its Future
Next Up: Editor's Pick