President Obama Explains Why The U.S. Is Bombing ISIS

U.S. President Barack Obama speaks about the situation in Iraq in the State Dining Room at the White House in Washington, D.C., August 7, 2014.
Saul Loeb—AFP/Getty Images
By Sam Frizell

As the United States is ramping up a bombing campaign against an extremist militant group in Iraq, President Barack Obama said in an interview with the New York Times published late Friday that the U.S. has a strategic interest in preventing the group from gaining a foothold in northern Iraq.

While Obama said the U.S. can’t just be “the Iraqi air force,” he argued it needs to “bolster” Iraqi leadership, and prevent Sunni extremists from forming a state through Syria and Iraq under the banner of the Islamic State of Iraq and Syria (ISIS).

“We do have a strategic interest in pushing back” ISIS, the President said in an interview with Times columnist Thomas Friedman. “We’re not going to let them create some caliphate through Syria and Iraq, but we can only do that if we know that we’ve got partners on the ground who are capable of filling the void.”

Moreover, the President said, the U.S. has a moral obligation in Iraq to defend populations that face slaughter at the hands of ISIS fighters, including the Yazidi minority group and Iraqi Kurds, both of whom are threatened by ISIS’ advance.

“When you have a unique circumstance in which genocide is threatened, and a country is willing to have us in there, you have a strong international consensus that these people need to be protected and we have a capacity to do so, then we have an obligation to do so,” the President said.

However, Obama argued the U.S. has to act as a catalyst for Iraq’s own leaders to handle the crisis themselves.

“[We] do think it’s important to make sure that that space is protected, but, more broadly, what I’ve indicated is that I don’t want to be in the business of being the Iraqi air force,” the President said. “I don’t want to get in the business for that matter of being the Kurdish air force, in the absence of a commitment of the people on the ground to get their act together and do what’s necessary politically to start protecting themselves and to push back against [ISIS].” 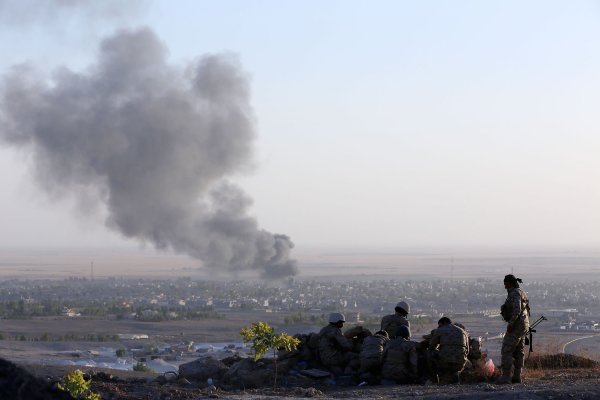 Air Assault on ISIS Continues
Next Up: Editor's Pick