CDC leaders integral to the Ebola response, including epidemiologists, laboratorians, logistics, and more, assemble in agency’s command center to discuss next steps in directing the response at CDC Emergency operations center in Atlanta, August 8.
Spencer Lowell for TIME
By Alexandra Sifferlin

The daily 10 o’clock meeting spills out of the EOC’s primary conference room, where the CDC’s heads of infectious disease control as well representatives for the State Department and USAID meet every morning to discuss what’s happening on the ground in West Africa. This is where they anticipate and discuss their next moves. Only a couple of days earlier, the CDC activated the EOC to a Level 1 response unit, the highest possible alert, which means everyone with related expertise is called to the table.

“We have been very concerned at CDC for weeks and months about [Ebola], and we’ve increased our activation to the highest level to surge on a response in Africa,” says CDC Director Dr. Tom Frieden, who just returned the night before from testifying in front of the House Committee of Foreign Affairs about the agency’s ongoing efforts to prepare for—and combat—the disease. “This Ebola outbreak is unprecedented. The single most important thing to understand about protecting Americans from Ebola is that [it has to be stopped] at the source in Africa.”

While the CDC has had experts on the ground since the first week of April, it recently announced that it’s sending a surge of 50 more disease specialists, including diseases detectives, laboratory experts and transmission-data analysts, to West Africa in the next 30 days, but those health workers need support from the stateside EOC for resources, data collection and communication.

A large part of the EOC team is made up of Epidemic Intelligence Service (EIS) officers—health professionals who are part of the CDC’s two-year training program for investigating infectious disease. Kelsey Mirkovic, 29, is a second-year EIS with a PhD in pharmacology who just returned from Gueckedou, Guinea. She was tasked with tracking down infected patients’ possible contacts. “One day there were two deaths of people with Ebola in one village, and 218 people were added to our list of contacts that day,” says Mirkovic. “We are talking about tracking down hundreds of people.”

As of Monday, there were six CDC specialists deployed to Guinea, 12 to Liberia, nine to Sierra Leone, and four to Nigeria, where cases of the virus are beginning to spread in Lagos, the largest city in Africa, much to the dismay of global public health groups.

“If current trends continue, it won’t be long before there’s more cases associated with this one outbreak than all previously outbreaks of Ebola virus combined,” says Dr. Stephan Monroe, the deputy director of the CDC’s National Center for Emerging and Zoonotic Infectious Diseases, who is spending a lot of his time in the EOC these days. “In most of these other countries, the initial event starts in a relatively rural area. So if we can get in quickly and contain it before it spreads, it’s much more effective. If it starts to spread in a large metropolitan area, especially in the very urban slum areas, it will be much more difficult to control.”

Dr. Frieden told TIME that an outbreak in Lagos is likely going to get worse before it gets better. Monroe says the CDC has experts in Nigeria identifying cases and the infected people’s contacts, as well as people helping local authorities with their exit screenings in order to keep infected people from hopping on an airplane and leaving the country. “In order to fully resolve the outbreak, we’re clearly looking at months, not weeks of effort,” says Monroe.

The EOC is also serving as the hub for Ebola containment in the U.S., should the disease present itself here. The CDC is, conveniently enough, just three minutes from Emory University Hospital, where two evacuated Americans with Ebola virus disease are being treated. The CDC has provided care guidelines for U.S. hospitals. And in one nearly windowless room of epidemiologists at the EOC, experts handle several calls daily from U.S. hospitals concerning sick patients with recent travel history to Africa.

As the weekend approaches, the EOC disease specialists start packing up and trickling out, despite a few frazzled workers trying to print off large outbreak maps that could be sent with traveling disease specialists before the day is done. The glow from the wall of computerized data sets and updates fills the room—with large graphs that highlight the early summer spikes in Ebola cases.

The upward trends serve as a sobering reminder that while the day may be done, the work is far from over. And while tired health care workers may be gaining a weekend, we’re still losing time. 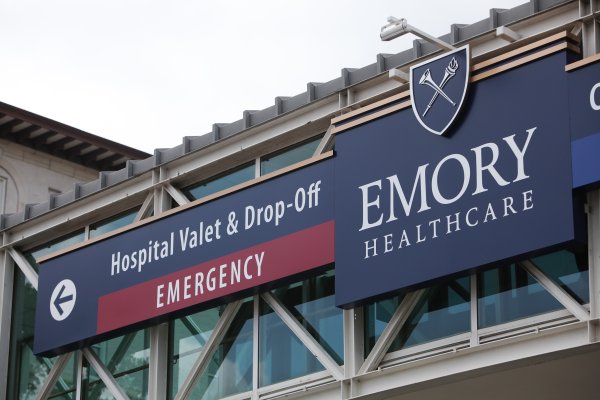