Kim Kardashian Is Publishing a Book of Selfies

Universe
By Olivia B. Waxman

Kim Kardashian is coming out with a book of selfies called Selfish. The 352-page hardcover ($19.95) will be published in April 0f 2015, by the Universe imprint of the renowned art bookseller Rizzoli, E! reports.

During an episode of Keeping Up with the Kardashians, the 33-year-old reality TV star said she got the idea from a “sexy” Polaroid photo book she gave hubby Kanye West for Valentine’s Day. “It ended up turning out so cool that we come up with this idea to do a book, a selfie book,” she says. “And so, I’m going to make some super-racy. I mean every girl takes full pictures of their a** in the mirror…I might share some of them.” (For background, see the viral one she posted last fall to show her fans how her backside looked after giving birth to North West.)

That means you can probably expect most of the book’s 352 pages to be filled with selfies like this one she posted a week ago featuring Kanye lying in bed with the caption “Side chicks be like….”

And in addition to the risqué ones, will she publish the selfies that she risked her life taking? Like that time she got “attacked” by an elephant mid-selfie in Thailand? (Well, technically, the elephant was just trying to “kiss her back,” she joked at the time.)

Kim Kardashian being attacked by an elephant after trying to take a selfie. Greatest elephant ever. pic.twitter.com/GwzRG0DHWh 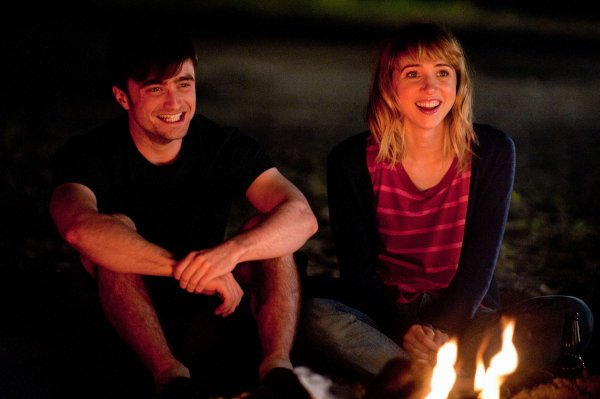 Daniel Radcliffe Does Not Find Tinder Addictive At All
Next Up: Editor's Pick