The post-war aftermath was just beginning to be calculated by both Israelis and Palestinians. Surveyors were going out to assess the damage in devastated parts of Gaza. People started referring to the war between Israel and the Palestinian militant group Hamas in the past tense.

But the reality is that the three-day ceasefire between the two sides, which expired on Friday morning, was only a temporary reprieve from a conflict that is not only unsolved, but, many fear, may be far from over. Palestinian militants in Gaza launched several mortars at Israel about two hours before the cease-fire ended, and then, as the 72-hour truce officially expired at 8 a.m., Hamas and other armed groups launched rockets at Israel, totaling about 40 by 2 p.m, according to the Israeli military. Two Israelis were seriously injured, one of them the director-general of the main college in southern Israel. The Israeli Air Force resumed airstrikes in Gaza, including one that killed a 10-year-old boy, according to local doctors.

Both Israel and Hamas see themselves as successful if not quite victorious in the past month of fighting, and assess that they have the strength and moral justification not to bend towards the other side’s demands. Hamas says it wants Israel to lift the blockade on the Gaza Strip, allow for the opening of an airport and a seaport, and to release Palestinian prisoners held by Israel, in addition to several other demands. Israel says it will not promise to relax limits on access for raw materials to and from Gaza because this will only be used for replenishing Hamas’ arsenal, and perhaps, rebuilding tunnels. In addition, Israeli Prime Minister Benjamin Netanyahu is calling for the demilitarization of the Gaza Strip as part of any rebuilding plan, a suggestion that Hamas and other Palestinian militant groups consider a non-starter.

“It’s very embarrassing for Hamas for a month-long war with such massive casualties and destruction to end without any achievements. They need to justify it, and if they stop without achievements at all, they will look ugly to the Palestinian public,” says Ghassan Khatib, a former minister in the Palestinian Authority and now the Vice President of Bir Zeit University, near Ramallah in the West Bank.

“So Hamas has to keep pressing to get something,” Khatib tells TIME. “But on the other hand, what they want from Israel is very difficult to get from Israel. And from Israel’s point of view, why should they give it? If Hamas got this many weapons under the siege, how about without a siege? The gap is very serious, and it needs mediation.”

That is the role that Egypt has sought to play, as it has in the past, after the last round of cease-fire efforts, negotiated by U.S. Secretary of State John Kerry and U.N. Secretary General Ban Ki-Moon, ended with the cease-fire’s collapse. Talks continued in Cairo on Friday between the various Palestinian factions and Egyptian security officials, but Israel pulled out of those talks when it became clear that Hamas and the other militant groups were holding fast on all of their demands. The militant groups also rejected a proposal to extend the cease-fire for another 72 hours, until Monday morning.

Future negotiations are likely to prove tricky. The fact that Hamas managed to hit Israel harder than ever before has led the militant group to dig in its heels, says Gazan political scientist Mkhaimar Abusada. Hamas killed 64 Israeli soldiers and fired upwards of 2,800 rockets—some of which were able to hit the cities of Tel Aviv, Jerusalem and Haifa—during the fighting. “Hamas feels it should get a much better deal in order to end the fighting,” Abusada told TIME.

Among the challenges in reaching an agreement to end the fighting, analysts note, is that whatever the Hamas political leadership says, its military wing is currently calling the shots. Known as the al-Qassam Bridgades, the military wing is led by a man named Mohammed Deif. “When Deif says that there will be no calm, let alone a truce, except with the total end to the blockade, then this means that he has the final word,” Abdel Bari Utwan, a London-based writer from Gaza, wrote in Rai al Youm, an online Arab news site.

Gershon Baskin, an Israeli peace activist who has in the past facilitated back-channel negotiations between Israel and Hamas, says that the sides are still far part. Hamas’ bottom line for stopping its rocket fire is far away from what Israel is prepared to give to a group it considers a terrorist organization.

“There will be changes in Israel’s isolation of Gaza policy after the war, but they won’t even get near to what Hamas is demanding,” Baskin says. Baskin, who was involved in the 2011 Gilad Shalit prisoner swap between Israel and Hamas, now says that Israel’s best bet may be to go over Hamas’ head altogether.

“The way out is to circumvent Hamas by going directly to the core issues in a regional framework—with the Arab Peace Initiative, with Saudi engagement, regional security plans—appealing to the Palestinian people in Gaza and the West Bank that the intention really is to end the occupation, sooner not later,” he tells TIME. That must come as a package deal, he says, including ending Gaza’s isolation, rebuilding the impoverished coastal strip and bringing about stability. 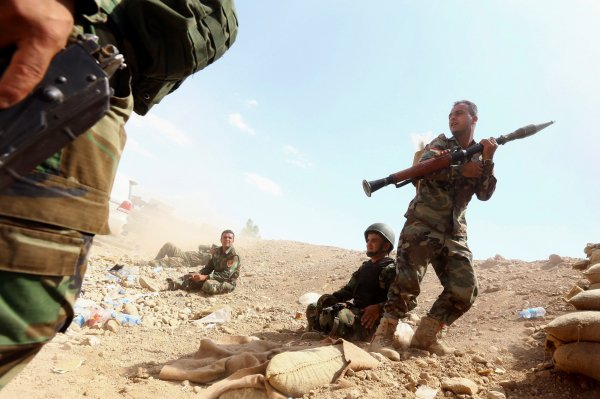 Fears Rise as Bombs Fall
Next Up: Editor's Pick