Attendees listen to speakers at the weekly meeting of "Congreso," or the Congress of Day Laborers. This is one branch of the New Orleans Workers' Center for Racial Justice, New Orleans, Aug. 6, 2014.
William Widmer for TIME
By Alex Altman / New Orleans

For the 1,071 unaccompanied minors who have crossed the southwest border this year and ended up in Louisiana, the path to a future in the U.S. runs through a courtroom on the 24th floor of an office tower in the heart of New Orleans.

Here, past the heavy doors and security guards, a rotating detail of judges determines the fate of the immigrant children streaming across the border and into the state. As they arrive in record numbers, the New Orleans Immigration Court is buckling under the strain.

During the first six months of 2014, the court has taken on 450 juvenile immigration cases, according to government records obtained by Syracuse University’s Transactional Records Access Clearinghouse (TRAC). That number puts the court on pace to shatter last year’s total of 540 cases. Three years ago, it had 71.

New Orleans’ struggle is part of a pattern. Nationwide, immigration courts have become choke points in the border crisis. Overburdened and underfunded, they are sagging under the weight of the new arrivals, with enormous case backlogs and a lack of attorneys able to perform work that must often be pro bono, or without charge.

At the end of June, the number of cases pending in U.S. immigration courts had climbed to a record high of 375,503, according to data amassed by TRAC. The largest backlogs are in states with the biggest immigrant populations, such as California and Texas, which have also received the greatest number of unaccompanied minors.

But as stressed as those states are, legal activists say the situation is worse in places where the number of immigrants may not be quite as high, but where there’s a shortage of lawyers able to represent a spiking population.

New Orleans is a prime example. The large number of Honduran immigrants resident here has made the Crescent City a magnet for kids fleeing the skyrocketing violence in the troubled Central American country. Over the past year, few cities have absorbed more unaccompanied kids than New Orleans. Yet the entire state of Louisiana has only about a half-dozen nonprofit immigration lawyers devoted to serving them, says Jennifer Rizzo, national pro bono promotion counsel for Human Rights First.

As a result, children are regularly summoned to complex legal proceedings that will shape their future without any legal representation. At the end of June, New Orleans Immigration Court had a total of 1,216 pending juvenile immigration cases. In 991 of them—81%—the child has no lawyer. Overall, 87% of immigrants detained in the state lack an attorney, according to a study by Human Rights First.

Legal representation may be the single largest factor in determining whether an undocumented immigrant wins the right to remain in the U.S. According to TRAC’s analysis of 100,000 case records obtained through the Freedom of Information Act (FOIA), immigrant children represented by an attorney are deported by presiding judges about half the time. In cases when juveniles went without an attorney, the success rate for sidestepping deportation was just one in 10.

“There’s a likelihood that these kids don’t know how to obtain legal representation, because nobody speaks English,” says Hiroko Kusuda, whose law clinic at Loyola University in New Orleans is one of just three listed service providers in the state. “If they don’t have legal representation, the chances of them getting relief from deportation is close to zilch.”

Kathryn Mattingly, a spokeswoman for the Justice Department’s Executive Office for Immigration Review (EOIR), said in an email that EOIR provides interpreter services for immigrant children for whom English is a challenge. But she acknowledged that some go without a lawyer. “Children are not guaranteed representation in immigration court proceedings, but all respondents have a right to representation at no expense to the government,” Mattingly said, adding that various government initiatives are designed to promote pro bono work.

The small community of immigration lawyers in the New Orleans area wants to help. Along with national advocates, they are scrambling to enlist new recruits. Kathleen Gasparian, an immigration lawyer in Metairie, La., started a program called PB&J: Pro Bono and Juveniles, which recruits pro bono attorneys and matches them with immigrant kids who have recently crossed the southern border and cannot afford legal services. Rizzo recently organized a conference to tackle Louisiana’s crisis in immigration representation, and convenes a monthly working group of local stakeholders. “The immigration court system is broken,” Gasparian says.

The issues were multiplying even before children started arriving. Louisiana has just two immigration courts, and the second, in the small city of Oakdale, more than three hours northwest of New Orleans, handles only detention cases. The backlog of pending cases statewide has soared to 6,703, up from just 732 a decade ago. “Now, you don’t even get your first hearing for a year,” says Ken Mayeaux, a professor at Louisiana State University Law Center in Baton Rouge who runs an immigration clinic for students. The average wait time for pending cases in the EOIR has climbed to 587 days.

Compounding that lengthening backlog, the New Orleans court is without a single devoted judge. Instead, a rotating trio of judges handle the docket, usually commuting from the Oakdale facility. Sometimes cases are decided over video conference.

The lack of a permanent judge is a symptom of a national problem, created by a hiring freeze imposed in 2011 by Attorney General Eric Holder as DOJ sought to cut costs in the teeth of the recession. The hiring freeze was lifted in February, but Mattingly declined to say when a new full-time judge will start at New Orleans immigration court.

On a steamy Thursday morning this month, TIME visited the court, on Canal Street downtown, in an attempt to observe proceedings. There were about six cases on the docket for the day, according to a printed list in the entryway, but two security guards barred this correspondent from entering, citing instructions from the presiding judge.

“In certain cases, including hearings involving credible fear reviews, the hearing is closed to the public unless the alien states for the record that he or she waves that requirement,” Mattingly later wrote in an email. On that day, she added, “there were no open cases.” 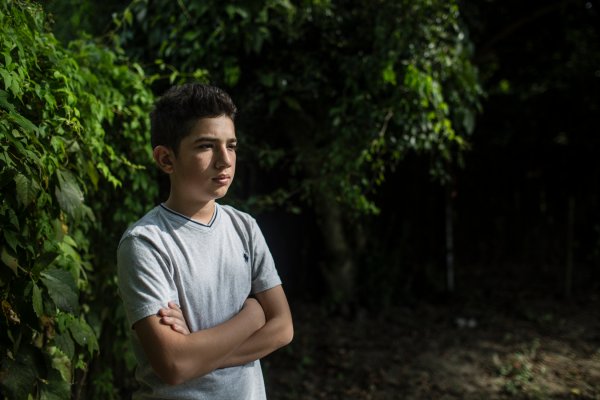 Michael's Journey: One Boy's Search for a New Home in America
Next Up: Editor's Pick