Senator Marco Rubio: Obama Needs to Dig In for a Fight in Iraq

President Obama’s decision to authorize humanitarian operations and targeted airstrikes in Iraq comes as fundamentalist Islam is on the rise throughout the Middle East.

Hamas and other Palestinian terrorist groups continue to threaten Israel. The United States and its allies have been forced to close their diplomatic missions in Libya because of fighting between secular militias and al Qaeda-affiliated groups. The Taliban is going on the offensive in Afghanistan as the United States and coalition partners continue to draw down.

And perhaps of most concern, in Iraq, the Islamic State of Iraq and Greater Syria (ISIS) has established a caliphate, a fundamentalist state, in the heart of the Middle East. Flush with weapons and money, ISIS’s forces are making significant advances as they expand their territory.

ISIS, an extreme Sunni militant group that emerged from al Qaeda, has been occupying and razing churches across Iraq, pulling down crosses, destroying religious documents and holy sites, and forcing Christians and other non-Sunni Iraqis to convert or face death. It is capturing young girls and the widows of men they have executed for their own unmarried fighters. It has seized bridges, dams and other infrastructure that Iraqi towns and communities rely on for subsistence.

The United States is right to intervene in Iraq to provide humanitarian assistance to persecuted religious minorities—including the Yazidis currently surrounded by ISIS forces in northern Iraq and Iraqi Christians, who have been brutalized as ISIS has swept through their villages, massacring thousands and conducting forced conversions of those they do not kill.

But America’s security interests extend well beyond the fate of Iraq’s religious minorities. Because ISIS, with thousands of foreign fighters, many of them from the West, will not rest once it has taken Erbil or Baghdad. Its expansionist ideology will lead it to attack U.S. allies in the region and eventually Europe and the United States.

We have seen time and again in recent decades that terrorist groups, once established, use safe havens to launch attacks on the United States and our interests. We ignore this history at our own peril.

Instead of confronting this challenge head on, President Obama has until now avoided taking decisive action. He has let the civil war in Syria simmer for years, creating the space for this jihadist threat to grow and letting instability spread to Syria’s neighbors. Even after ISIS captured Iraq’s second largest city, Mosul, in June, the President was hesitant in his response, sending several hundred military advisors but not confronting ISIS directly even as it made military gains. Now, we are rightfully providing food and water to people who face slaughter from extremists who have pledged to kill them.

Given the threat that ISIS poses to not just the central Iraqi government in Baghdad, but also to our Kurdish partners in northern Iraq, the President was right to begin to strike ISIS targets. We also need to strike supply routes from Syria, leadership, and frontline military units from the air. We should target the oil refinery in Syria they are using to fund their operations. And we should go after other assets and funding networks to deny them the financing they need to carry out their operations.

We need to significantly increase our military and humanitarian assistance to the Iraqi government, as well as the Kurdistan Regional Government. Baghdad has in recent days taken action to assist the Kurds with air support, providing some hope that a political settlement that unites all Iraqi political factions remains possible.

The Kurds in particular need urgent U.S. assistance, including weaponry and training for their peshmerga forces that are now facing an adversary equipped with more advanced weaponry, some of it of U.S. origin stolen from the Iraqi military. The Kurds are also hosting more than a million refugees from other parts of Iraq and Syria that have fled their villages in the face of ISIS’s advance. Due to ongoing disputes between Erbil and Baghdad, the Kurdish government has limited resources to continue to provide for these refugees and for their own people.

President Obama rightly stated that he decided to use military force to protect U.S. diplomats and military personnel in Iraq. But this should not be our only goal.

ISIS’s continued rise is not just a problem for Iraq or its neighbors. If we do not continue to take decisive action against ISIS now, it will be not just Iraqis or Syrians who continue to suffer, it will likely be Americans, as a result of a terrorist attack on the U.S. homeland or on our personnel overseas. America was faced with the same choice President Clinton faced in the 1990s during the emergence of al Qaeda: take action now, or we will be forced to take action in the future.

It is time to begin reversing this unprecedented tide of jihadist victories. America’s security and the safety of the American people are at stake.

Marco Rubio, who represents Florida in the U.S. Senate, is a member of the Senate’s Foreign Relations and Select Intelligence Committees. 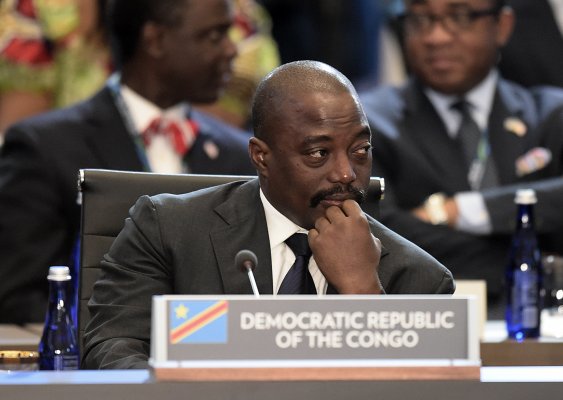 Congo's Presidential Entourage Investigated for Beating Protesters in U.S.
Next Up: Editor's Pick