Obama's 18 Favorite Golf Partners (You've Only Heard of One) 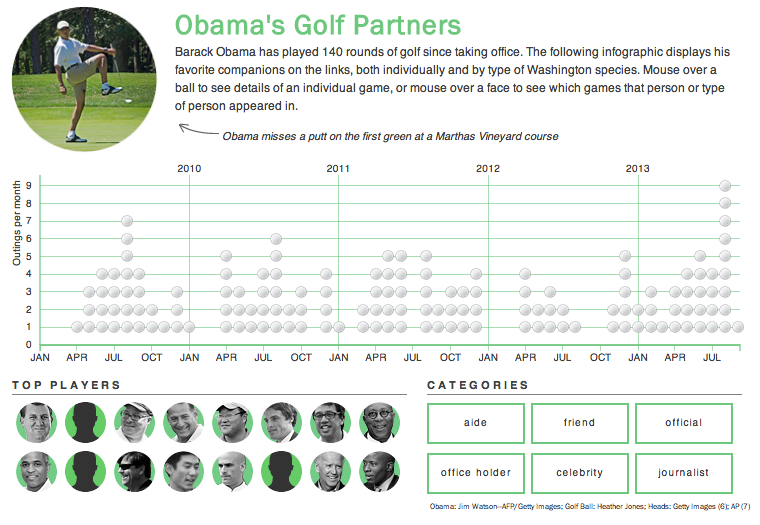 For decades, the most powerful golf game in Washington has usually been whichever one the President plays. In the past five years, the capital’s power brokers have had almost zero luck joining it. Marvin Nicholson, meanwhile, has had the privilege 103 times since Barack Obama took office.

Nicholson is not a Washington stiff. He is a former bartender and caddy who became John Kerry’s body man during the 2004 campaign after meeting the then-senator at a windsurfing shop. He now serves as Obama’s trip director, overseeing all aspects of the president’s travel. But his most important role is arguably as First Bro, accompanying the president on about two-thirds of his 145 golf outings since taking office, according to TIME’s analysis of daily press pool reports.

Most presidents play golf, regardless of whether they enjoyed the sport as a non-president. Clinton, who was famous for cheating, employed the sport just as one might assume: as grounds for entertaining donors and buttering up entrenched political opponents. Obama clearly prefers to use his tee times to unwind with the guys—and they are almost exclusively guys—and appears reluctant to introduce new faces to his foursomes. He eschews golf’s “good ole boy” image in at least one way: Of the 16 men Obama has played golf with at least 5 times, 12 of them are younger than him, most by at least a decade.

And since winning reelection, he has played like a man possessed. His outing with Nicholson and sports journalists Tony Kornheiser and Michael Wilbon on Sept. 14 marked the 11th straight weekend that he has played, dating back to an Africa trip in late June that pulled him away from the game for a few days. Between a birthday celebration at the Andrews Air Force Base on Aug. 3, six rounds during a week in Martha’s Vineyard, and two weekend outings in the Washington region after returning, he set a personal record of nine outings in the month of August. He squeezed in the last of those outings shortly after he announced that he would seek Congressional approval for a military strike on Syria. Through the first week of September, he has played 32 times in 2013, putting him on track to shatter his annual record of 34 games, set in 2011.

If there’s any question that Obama prefers to leave the presidency behind when on the course, consider this: Obama has included another elected official in a game only nine times since taking office, and on five of those occasions that official was Joe Biden. Meanwhile, he has played 33 rounds with campaign photographer David Katz, 26 with his friend Dr. Eric Whitaker from Chicago, and nine with Walter Nicholson, a man who’s chief qualification is being the trip director’s brother.

Data updated as of Jan. 3, 2014. An archive of pool reports was generously provided by Gerhard Peters of the American Presidency Project. Names of Obama’s companions were first extracted using a custom computer script and then checked by hand. When possible, results were corroborated against the Washington Post POTUS Tracker and records kept by CBS News White House Correspondent Mark Knoller.

With Alexander Ho and Alex Rogers.

Read More From TIME
You May Also Like
Read Next
Next Up: Editor's Pick