A Ugandan homosexual photographed in a safe-house at an undisclosed location in Uganda, in March 2014.
AP
By Maya Rhodan

Nicholas Opiyo, the lawyer who led a constitutional challenge of Uganda’s anti-gay law, says that while the days of gays, lesbians and transgendered people getting publicly flogged may be gone, ongoing acts of discrimination against LGBT Ugandans keep him pushing for equal rights in the East African nation.

“That is what is most scary,” Opiyo told TIME. “The unseen, the unreported, the unwritten discrimination in the shop you go to, in the medical center you go to, on the bus you take or on the motor bike you take into town. That breaks your spirit.”

In March, just days after Ugandan President Yoweri Museveni signed the restrictive bill that punished gays with life imprisonment as punishment for their sexual activities, Opiyo and a group of Ugandan activists and lawyers challenged the law in court. On August 1, they found success through a somewhat unusual means: Uganda’s constitutional court declared the law null and void because Parliament didn’t have a quorum when it was passed.

While the law was stricken down on account of a technicality, and lawmakers said Tuesday they had the votes necessary to re-pass the bill, activists have declared the court’s decision a victory, albeit only one step in an ongoing battle. For Opiyo, who says he grew up wanting to stand up for the underprivileged, the decision to join the fight for LGBT rights in the country was simple.

Having traveled to Washington, D.C. for the U.S.-Africa summit, Opiyo said that though he was able to meet with human rights workers, lawmakers and other stakeholders in the global fight for equality, the summit itself was a missed opportunity to have substantial conversations about the struggles Africans are facing across the continent on a daily basis.

The following Q&A is a sampling of the conversation between TIME and Opiyo. It has been condensed and edited for space.

TIME: What would you say the status of LGBT rights is in Uganda in the wake of last’s week’s decision?

Opiyo: Nothing has changed much. The deep sense of homophobia in Uganda remains unchanged. In any case, it’s only been made worse by this ruling, because the debate has been reopened in a more bitter and fierce manner than we’ve seen before. To be positive, certain incidental things that are good will happen because of the ruling. First, individuals and organizations that have been facing arrest, intimidation or investigation will now have all those cases against them dropped, because the very foundation for these cases has now been declared unlawful. Organizations that have been closed under the [Anti-Homosexuality Act] will now have their operations resume without the fear of the law constricting their work. Even if parliament is resolved, as they are now, to reintroduce the law … they will at least pay attention, some attention to the issues that we have raised in our petition, and perhaps have a somewhat watered down or even—I’m hoping—progressive law in that regard.

This law was one of a couple of instances of morality politics coming into play in Uganda. What do you think the draw is to laws like this in Uganda and across Africa?

There has been a growing influence of American evangelical ideologies in the policies of government in Uganda. The examples are plenty in Uganda—in the HIV/AIDS campaign, Uganda was praised for its response to the HIV/AIDS campaign because it had the message for condom use. When the Christian evangelists got a foothold in influencing government, the policies changed from condom use to abstinence and being faithful. Condoms were “by-the-way;” that was the influence of what we call in Uganda people who are saved. If you look at the laws that have passed since then, whether it is a media law or an NGO law, it has a strong element of public morality. That’s new, what seems to be in my view, a moralization of the legislation process. They have a strong foothold in government mainly because the Pentecostal movement is a big movement. They have numbers, they have young people, and they have a huge following. Politicians like numbers.

Is there a benefit to having this influence? And if not, what is the downside?

But faith can be a force for good. Faith can be an avenue for the delivery of services; many parts of our country that were under war survived because faith organizations were able to stay through the conflict and provide support—that’s the upside. But in my view I think the downside is extremely dangerous.

The people who advocated for the AHA were motivated by, financed by, American evangelicals. It’s an American group driving this debate at home. This debate was not a popular debate. It was not an issue in Uganda because people in Uganda are struggling about food, employment, medical care, access to medical services, education—these are the things that occupy the people in my village, in my town. Not homosexuality—that was a non-issue. This issue was put in the national debate because of the influence of the American evangelical movement. The Americans brought this to our country they’ve got to sort themselves out back home, here, to ensure that the radical American preachers don’t spread hatred across the world.

Secondly, I think that the American government must understand that their response to this issue in Uganda at some point escalated this debate and shifted the narrative of this debate from being a human rights issue to a new colonial attempt by Americans to impose their values on Ugandans. The politicians are very quick to pounce on that. The debate shifted to America versus Uganda, not about Ugandan people who face discrimination every day. The American government can redefine this narrative by given prominence to local leaders. This is a Ugandan problem. Ugandans must find the solution to it.

What is it like working on the ground, addressing the issue of LGBT rights? How is it received?

It’s very very tough. It’s not exciting. You’ve got to have a lot of courage to stay your course. People will throw insults at you—you just have to go to my Facebook page to see the amount of insults people are throwing at me on Facebook, on Twitter. It’s difficult. People begin to put pressure on your family, on your relatives and that translates to pressure on you as a person. It’s extremely difficult. I haven’t felt physically insecure, but I felt the narrative vibe coming my way.

The height of it was in March this year, I was the Secretary General of the Bar Association of Kampala, I was in charge of managing all the affairs of all the lawyers in Uganda. At the annual meeting, a group called “The Ugandan Christian Lawyers Association” launched a campaign against me because of my involvement in this case and made sure I was booted out of the law society. Those things have happened, but in my view it is no way close to the pain and suffering that members of the community are going through. It’s not even half of it.

What makes you stay the course?

This is human rights. This is not a special category of rights. You’re talking about the right to associate; the right to choose your partner; the right to love who you want to love. These are human rights. To call it LGBTI rights is misleading. I’ve always been a human rights lawyer. I grew up in a war-torn area in Northern Uganda. I’ve been in a very underprivileged position, but I’ve always wanted to do something about it. I thought at first I should be a journalist, but I figured out writing alone doesn’t help. So I figured I should be a lawyer and here I am.

Where’s the disconnect between understanding the benefits of human rights and the impact that equality can have on the people of Uganda—like you mentioned—how do these multiple issues play hand-in-hand?

In terms of LGBTI issues in Uganda, I think the discussion has been presented in a way that they’re separate. When you talk about health care, you aren’t talking about LGBTI rights. The discussion hasn’t been–there’s no interplay. We’ve tended to compartmentalize these issues. There hasn’t been a wholistic approach to this issue—even those working on this issue tend to look at it from a very narrow lens as opposed to an overall issue of discrimination. We’ve done a lot of work around discrimination against women, against persons with disabilities, and stigma around HIV/AIDS—you’d think that the same momentum would be applied on this issue, but it is not because people tend to look at it from different lenses, but in my view it is not. In my view that’s not helpful. In my view, there needs to be a consistent, overall approach to human rights no matter who the human being is.

This week was the U.S.-Africa summit. A couple of years back, President Barack Obama said Africa needs “strong institutions, not strongmen.” A number of people, including Daniel Bekele of Human Rights Watch, said this week’s summit should be about more than paying lip service to human rights. How do you think this conference succeeded in doing that and how do you think it failed?

This conference seemed to be more focused on issues of securities and investments, at least the ones I’ve taken part in, there has not been a meaningful engagement between civil society and those working on human rights issues and the heads of states. The thing about the heads of states, they did not engage enough on the issues of human rights. Yes, in the final press statement President Obama talked about good governance, rule of law, but it appears to me the focus has been on economics. In that room were leaders of the continent who have questionable human rights records, it would have sent a strong message if these leaders were excluded from this conference or excluded from relations of dealing with the American government.

How do you not invite Mugabe but invite Jammeh of the Gambia? What’s the difference? They are all dictators. They have been in power for over 30 years. I think the American government needs to focus on dealing with human rights as a core function of their foreign policy towards the African continent, and must not put economic and security interests above human rights issues. I thought in this summit the discussion about human rights has been very, very light.

When do you think gays, lesbians, transgendered people will be completely safe in Uganda? How long do you think that will take?

That is difficult to tell, precisely because the sense of homophobia, the sense of discrimination is so deeply entrenched. It’s going to be a long journey that will require patience; that will require deliberate actions on the part of both sides of the debate. But ultimately it’s going to take the commitment of the politicians and the leaders to reshape the narrative and the debate in our country. There has to be an honest debate within the faith community on this matter. In much the same way that they’re having an honest debate about the rights of women—that debate must come out. As long as the leaders are playing by the popular sentiment and not enforcing the values and obligations that signed up to do in their various human rights instruments this matter will still be delayed. It’s a long, long way to go. I can’t put a number to it but I think that it’s going to be a long walk and a difficult one at that. 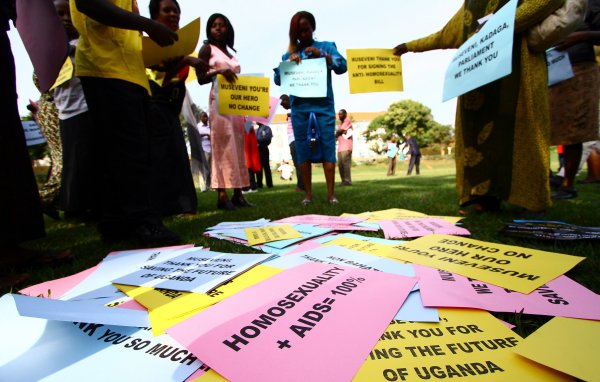 Uganda court throws out anti-gay law
Next Up: Editor's Pick