Yoshiki Sasai, right, deputy director of the Riken's Center for Developmental Biology, poses for a photo with Haruko Obokata on Jan. 28, 2014.
Kyodo/Reuters
By Kirk Spitzer / Tokyo

It was a success story that Japan sorely needed: a young, talented and beautiful researcher developed a cheap and simple way to grow versatile stem cells.

The discovery promised to usher in a new age of regenerative medicine, validated Japan as a leader in scientific research and demonstrated that even in a male-dominated society, women could excel when given a chance.

Alas, it may have been too good to be true.

Intrigued by researcher Haruko Obokata’s breakthrough, other scientists tried but failed to replicate her results. Peer-review websites accused her of falsifying data and doctoring images, and supervisors were accused of lax management. Obokata, 30, was forced to retract her scientific papers, and the government-sponsored research center where she worked launched a formal investigation.

The matter took a darker turn this week when Obokata’s supervisor and mentor, Yoshiki Sasai, a noted scientist in his own right, was found hanging from a stairway railing at his office.

In farewell letters found at his desk, Sasai reportedly apologized for the turmoil, but urged Obokata to continue her work and to prove her detractors wrong.

Sasai’s death cast a pall over the controversy. But in a nation where suicide does not carry the same stigma as in some Western countries, there has been a certain degree of sympathy — if not outright approval.

“This is seen in some respects as an honorable way out of a shameful and devastating turn of events: ‘A highflyer brought low by an underling’s mistakes, seeking to atone for and expunge the shame,’” says Jeffrey Kingston, a professor of Asian studies at Tokyo’s Temple University-Japan. “This touches a chord of sympathy and understanding in Japan.”

Sasai was a noted stem-cell scientist and deputy director of the RIKEN Center for Developmental Biology, in Kobe — part of a national research system that receives roughly $1 billion a year in government support and is part of an ambitious effort to boost scientific research throughout Japan.

The 52-year-old was not directly involved in Obokata’s research, but had helped recruit her and supervised the research papers that were published in the British journal Nature in January.

But whether Sasai’s death generates sympathy for Obokata or the rest of Japan’s scientific community remains to be seen.

Obokata burst onto the scene in late January with the publication of the Nature papers, of which she was the lead author. Those studies claimed to have found a new way of creating stem cells, dubbed stimulus-triggered acquisition of pluripotency, or STAP. Such cells could be used to create new tissue, with potential for treating illnesses like Alzheimer’s, heart disease and stroke.

Poised and photogenic, Obokata was an instant hit with Japan’s frenetic media —mainstream and social, alike. Here, after all, was a different kind of scientist. Even in the lab, Obokata flashed stylish clothes, false eyelashes and fashionable hairstyles. She eschewed the usual white lab coat in favor of a traditional housewife’s kappogi (a gift from her grandmother, she explained) and had the walls of her lab painted pink and yellow and decorated with cartoon characters.

Even Prime Minister Shinzo Abe, who has made “womenomics” a key plinth of his economic revival package, noticed. He commended Obokata’s apparent achievement from the floor of Japan’s Parliament and vowed to build “a country where the women are the brightest in the world.”

But it didn’t take long for doubts to surface. Peer-review websites noticed oddities and discrepancies in Obokata’s research. Attempts to replicate her findings failed.

By mid-February, RIKEN had launched an internal investigation. In April, officials charged Obokata with fabricating data, doctoring images and borrowing descriptions from other research papers.

Meanwhile, discrepancies were found in the research of other leading scientists, though none with the public profile of Obokata.

In an excruciating, four-hour press conference televised live by many of Japan’s major networks, a tearful Obokata struggled to maintain her composure. She admitted errors in her research papers, but maintained they were innocent mistakes that did not affect the final results. STAP cells were real, she insisted.

She has remained on the staff at RIKEN but has maintained a low profile, refusing interviews. In July, RIKEN officials announced that she would be allowed to take part in a five-month experiment designed to discover once and for all whether her initial findings were real. Other researchers and video cameras would monitor her work, officials said.

The RIKEN affair has been watched closely by Japan’s scientific community, which has produced its share of Nobel Prizes but is often viewed as insular and underperforming.

“One thing that should not be lost in all this is that Japan produces outstanding science,” says Jonathan Dorfan, a former director of the Stanford Linear Accelerator Center, at Stanford University, and now president of the Okinawa Institute of Science and Technology in Japan.

“People in the scientific community here are paying attention to this, and hopefully that will lead to the kind of training that will avoid an outcome like this happening again.” 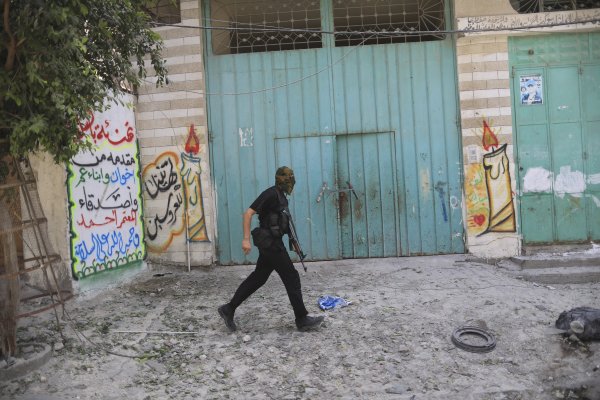 Hamas Will Continue Fight
Next Up: Editor's Pick