“There were trees everywhere, the roads were completely blocked,” Bob Petrici, a woodsman living outside the town of Pahoa, tells TIME.

Iselle was downgraded from a hurricane to a tropical storm just before it struck Hawaii, yet there was no debate over its ferocity. Thrusting rain and massive waves onto the island, Iselle is expected to release an even heavier downpour as it crashes into the towering Mauna Kea and Mauna Loa mountains. Meteorologists are warning of possible land- and rockslides.

“It’s absolutely a danger to people,” says Professor Steven Businger, principal investigator at Mauna Kea Weather Center. “You need to have a nice symmetric situation for a storm to be happy. The ocean is its energy source, so when it runs into a wall, it’s going to significantly disrupt the circulation of the winds.”

Petrici left his house when he smelled the smell of rotten eggs and received an alert that there had been an emergency steam release at the nearby geothermal power plant. Since he owns one of the only hydrogen-sulfide monitors in the area, he felt compelled to check the levels, but failed to reach the plant.

“I cut my way through, but when I came across a tree sagging over the power lines and heard the cracking from the forest, I decided to go back. I think it’s really odd that they didn’t shut down the plant, but my educated guess is that there’s no risk of a major incident.”

A civil defense operation center has been assembled in the major town of Hilo, gathering first responders, road crews, the Department of Parks and Recreation and the Red Cross. Kevin Dayton, executive assistant to Mayor Billy Kenoi, at 10 p.m. local time said the storm’s impact so far has been less severe than expected, but that the worst could yet come.

“We don’t want to be too optimistic, but it’s looking good,” he said by phone. “We stay hunkered down and wait, and try to clear roads as fast as we can.”

After passing the island of Hawaii, Iselle is expected to skirt to the south of the archipelago, where a tropical-storm alert is currently in effect. Over the weekend, an even more powerful hurricane, Julio, is expected to barrel just to the north.

Hawaiians have been preparing throughout the week for Iselle’s onslaught, decimating shelves in grocery stores and supermarkets. Kawehi Cochrane, who runs a guesthouse in Hilo, made sure her guests left before the airport closed.

“I’m very nervous, my stomach’s churning,” she says. “My windows don’t have modern coating, and I’m afraid to lose roofing.”

As the evening progressed, however, Cochrane moved out onto her porch, and the familiar Big Island choir of coqui frogs could be heard over the phone line.

“It feels like Hilo now,” she said. “I think the worst is over, I feel safe.” 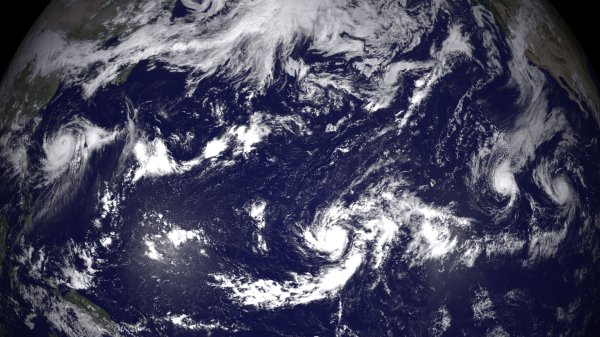 Earthquake Hits Hawaii as it Braces for Two Hurricanes
Next Up: Editor's Pick