The Bachelorette's Nick Viall: Why I Brought Up Sex

On The Bachelorette, the lights dim and the cameramen leave when it comes time for the Fantasy Suites. There’s an unwritten rule that no one really talks about what happens on those nights. However, what happens there actually affects the relationships in profound ways. It’s a time when a couple can be together and share special time without the cameras. It doesn’t have to mean sex, but, of course, we all know that happens. Sean Lowe believes sex should happen in marriage, but I like that he’s open about the discussion surrounding the topic.

When people are hesitant to discuss sex, especially in the context of The Bachelorette fantasy suites, it feels a little inauthentic.

By now, everyone knows what happened in the fantasy suite between Andi and me. In the “After the Final Rose” episode, I had no intention of confronting Andi with my now infamous question about why she had sex with me. I figured she had been conflicted about what must’ve been a tough decision. The world of The Bachelorette is a complicated one, after all.

However, she started explaining away our relationship in the tidiest terms. In her explanation, she confessed that she had never loved me.

I let that sink in.

She never loved me.

As I sat there on national television, I tried to process this information. In my mind, I went back to that night in the fantasy suite. Though she couldn’t tell me that she loved me, I’d told her in no uncertain terms how I felt. I loved her. This was no fling for me. As far as I was concerned, we’d be engaged in a few days.

To me, sex between us was a big deal, and she knew it.

That’s why I feel Andi’s decision to have sex with me was not appropriate. Either she was unsure about our relationship or – worse – she was certain she was choosing Josh. In both of those circumstances, I felt as if she didn’t respect my feelings and that she should not have had sex with me.

Why? Well, once we had sex, my feelings of love would be solidified in that scenario.

In the After the Final Rose, her demeanor and perceived disregard for the relationship that we had took me back. That’s why I decided to ask her that very simple question.

I used the phrase “make love” because that’s how I felt. It was more than just physical. It was an act – I thought – of love.

Whatever your beliefs about sex, we live in a very sexual world. To me what’s most important is that the two people involved have a clear understanding of what sex means to the other person. If the emotional attachment to sex isn’t equal, sex can be hurtful. Consequently, it should be treated with the greatest amount of respect.

Yes, both men and women need to respect it.

Sometimes people laugh off any emotional damage that sex can do to guys. The boys-will-be-boys mentality suggests the majority of men are really just looking to add another “notch on their belt.” Because of this unfair – inaccurate – stereotype, it’s often considered unmanly for a man to speak about the emotional repercussions of sex. But I’m here to attest that men fall in love just as hard as women do and that sex can be just as powerful to a man as it is to a woman.

Sex, when enjoyed in the right context, is a wonderful way to solidify a relationship. But when expectations aren’t the same for both partners, it can be devastating.

Let me say this: don’t shame Andi to support me. We all make mistakes, I’ve made mistakes. In a culture where sex has no bounds, it’s hard to figure out how to fit it into your life without hurting each other. That’s why it’s important to be sensitive to the emotional attachment that sex has to your potential partner and to treat it with the greatest amount of respect.

Also, I want to emphasize that I wish Andi and Josh all the best. I hope they have incredible happiness in their life together for years and decades to come.

I’m speaking out about this incident because I hope Bachelor Nation will have a more honest conversation about the Fantasy Suites and the emotional repercussions of sex.

Nick Viall was the runner-up on The Bachelorette. 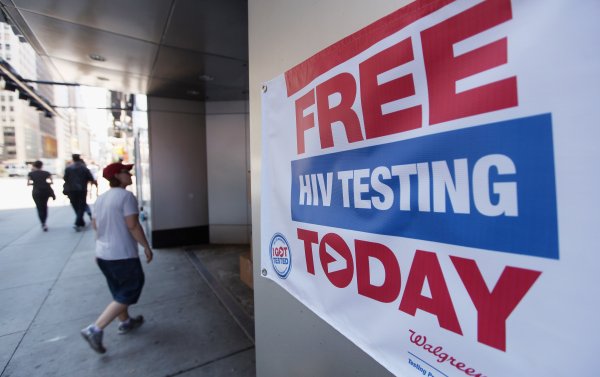 Waiting With HIV
Next Up: Editor's Pick