The first time I came here was October 2011, after a fairly wild first month at the University of Leeds in England. I’d been laid up in bed for a week with what I thought was flu and, being cautious, took myself to the doctor. A week later the office called to schedule a follow-up appointment for two weeks before my 20th birthday.

A bald health counselor holding a clipboard called me into a side room, asking politely how I’d been. He sat me down in a chair opposite his, and broke the news to me so fast that I hadn’t even thought to brace myself: “Patrick, your blood tested positive for HIV.”

I remember experiencing what I imagine rigor-mortis might feel like in my chest, I remember not listening to much of what was being said, and I remember that it wasn’t until after I left the Leeds Centre for Sexual Health and walked back onto campus that I finally cried. I collapsed onto a bench amongst the university’s brutalist architecture, next to a grid-like fountain, whose pattern seems only to be confusion, beneath a large bronze statue of Hermes, God of Transitions, my next appointment card crushed in my fist.

I was one of 725 new patients below the age of 24 to be diagnosed with HIV, the virus that causes AIDS, in the U.K. that year, out of a total of 2.5 million new infections worldwide. These numbers signify progress; this figure stood at 3.2 million in 2001 and decreased to 2.3 million in 2012 (the most recent statistics available).

I am among the first generation of HIV patients who can look forward to a practically normal life expectancy and little fear of developing full-blown AIDS due to access to antiretroviral drug therapy. There has never been more hope for patients with HIV than there is right now.

But that doesn’t change the crushing impact or seriousness of the diagnosis. And it doesn’t mean the danger has gone away. In fact, in July, the World Health Organization recommended that HIV negative men who have sex with men or “MSM” (the term epidemiologists use to cover gay and bisexual men) should take HIV medications similar to mine as preventative treatment because there has been an explosion of new cases among these men worldwide, bucking the trend of progress seen amongst other groups. Taking these medications preventively might only encourage complacency about the practice of safe sex and cause a rise in cases of other sexually transmitted diseases, bringing more people to waiting rooms like this one.

The Leeds Centre for Sexual Health is a fairly drab and dirty-looking building at one corner of the Leeds General Infirmary. The waiting room for men, which I visit every three months, is long and narrow with seven uncomfortable benches made from high-backed blocks of gray-laminate chipboard padded with blue wipe-clean vinyl cushions. I’ve watched idle thumbs and nervous fingers pinch and pluck small holes in these cushions into gaping wounds of mustard-coloured sponge. There’s no coffee machine, just a water cooler in case you are particularly dehydrated and they need a urine sample out of you.

Some people employ the counterintuitive, rowdy approach to dealing with this space. Younger guys in baggy jeans and tracksuits come in with friends, talking about the size of their anatomy and trading expletive-laced barbs about sexual acts to distract themselves from their nervousness. Men in suits will try to keep up the appearance of normality as they loudly proclaim into their Bluetooth headsets things like, “I’m just at the bank.” One guy seemed particularly adept at this subterfuge: “I’m just on my way to the mosque to pray.”

The most common reaction, though, is to avoid socializing. We seat ourselves as far away from one another as possible, and each new entrant tries to split the largest gap he can find down the middle. We avoid eye contact: fixing our gaze at our feet, staring through old magazines or a phone, utilizing hats, hoods, and sunglasses to paint a fiction of looking incognito. The fear is that you’ll recognize somebody from the outside, or worse: they’ll recognize you.

It happens: Once I saw another student with whom I’d had a one-time thing. We hadn’t done anything risky, but I still panicked because I’d chosen not to reveal my status to him. As soon as I spotted him, I dived into the bench closest to the entrance and deliberately held my back toward him. Unfortunately, my doctor called “Patrick” at the far door soon after. I was forced to do a walk of shame right past him as she asked me to confirm my date of birth. Thankfully I hadn’t lied to him about my age; he had been more willing to ask me that question than he had been about anything important such as my HIV status.

I panicked, thinking he’d realize that for me this visit was a regular thing. I worried he’d judge me for not having told him before. If I just had the confidence to own my HIV status 100 percent of the time, perhaps I’d have found a friend like me and broken the strange spell of anonymity and alienation here.

HIV is a hidden disease. Twenty percent of people who have been infected don’t know they have it in the U.K. alone, and they are thought to be responsible for the majority of new infections. For those diagnosed, there is no law requiring HIV disclosure, provided precautions are taken. To disclose often means to be rejected so many keep their status secret. And because so few of us talk about our diagnoses openly, perceptions of HIV as something that happens to other people have become rife

Other people simply don’t care enough until it’s too late. I have had two partners, who were fully aware of my status, request unprotected sex anyway. One tried to convince me by saying, “If I get it I get it, that’s my fault and my problem.”

I will be on medication until the day I die and meals and other activities are planned around when I have to take them. If you include all of the medications I take to manage side effects like nausea, diarrhea, and sleep disrupted by lucid nightmares, I’m potentially written up for 36 pills per day. That’s not counting antibiotics I’ve needed to treat various infections that otherwise healthy people might have fought off unaided. I’ve even sought professional counselling for depression.

Though I’m now feeling good and coping well with my condition, I wouldn’t wish my regime of appointments or regimen of drugs and their side effects on my worst enemy. Every time I hear my name called from the far door of the waiting room, I get a twinge of the tight pain I felt in my chest when I got my diagnosis. It serves as a solemn reminder to me to take my condition seriously. I don’t want others to have to join me there on the blue benches, afraid to be honest about who we really are.

Patrick Reynolds is a poet, writer, and student of English at the University of Leeds. You can follow him on Twitter and Medium @dontlimitmyspee. This piece originally appeared at Zocalo Public Square. 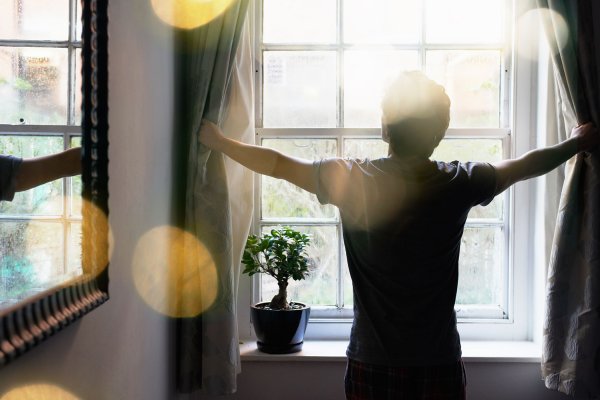 10 Ways to Become a Morning Person
Next Up: Editor's Pick