Hawaii Is Preparing for a Double Hurricane Hit

Two hurricanes currently churning in the Pacific Ocean are projected to pass over Hawaii this weekend.

Governor Neil Abercrombie signed an emergency proclamation on Wednesday as hurricanes Iselle and Julio approached the island chain from the east.

The storms will be the first hurricanes to directly strike Hawaii since September 1992, when Hurricane Iniki battered several of the state’s major islands.

Forecasters expect Iselle to make landfall over the Big Island of Hawaii on Thursday afternoon local time, bringing with it maximum sustained winds of up to 70 m.p.h. and as much as a foot of rain. Julio will graze the island by Sunday morning, weakening as it passes.

“The Big Island will get the worst of it,” Eric Lau, a meteorologist with the National Weather Service in Honolulu, told TIME. “People should expect potential power outages, downed trees and flying debris. It’s not a common occurrence here.”

Hawaii’s largest island is home to nearly 200,000 of the state’s 1.4 million people, while some 75% of the population lives on Oahu, to the west, where Honolulu and the outlying area are currently under a tropical-storm warning.

The local press have described the impending weekend as a meteorological “one-two punch” — two storms, relatively weak on their own, that together will bring potentially dangerous conditions for as long as five days. Abercrombie’s proclamation will last until Aug. 15, allowing the state to turn to a $2 million fund earmarked for emergencies.

Residents are meanwhile buckling down at home. The Hawaii State Department of Education closed all schools on the Big Island and neighboring Maui on Thursday and Friday, while voters hustled to cast early ballots in Saturday’s primary election for governor and congressional representatives.

“Water and Spam have been flying off the shelves,” Honolulu resident Kory Johnson joked. (The state reportedly eats 7 million cans of the precooked meat each year.) “A lot of businesses are closing down — including the medical clinic I’m working for — and there are massive lines at Costco. People are stocking up.”

Many tourists, however, are vying to steer clear of the storms before they hit. To assist travelers in altering their plans, Hawaiian Airlines has temporarily waived its reservation-change fee — typically $30 to $200, depending on the route — as have other carriers. At the Wailea Marriott Resort and Spa in Maui, staff members have posted hurricane information flyers for visitors to consult, but their audience is dwindling: a hotel clerk who identified herself only as Alicia told TIME that a number of tourists have canceled their reservations in anticipation of the hurricanes.

She stressed, though, that the hotel had safety measures in place should the weather turn severe.

“We have an evacuation route planned on the island,” she said. “The safety of our guests is our first priority.” 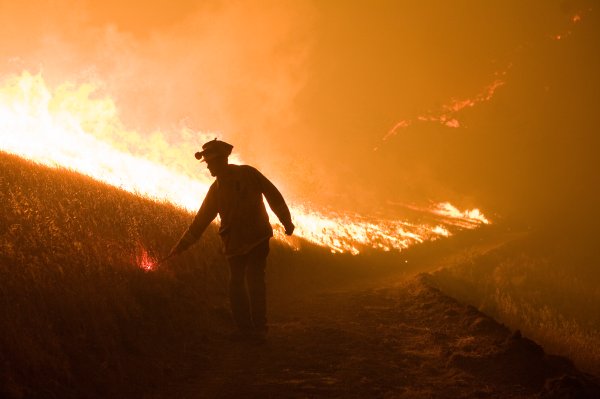 California Is the State of Emergencies
Next Up: Editor's Pick