More than three decades after Cambodia’s Khmer Rouge wiped out a quarter of the country’s population, two key architects of the regime have been found guilty of crimes against humanity by a U.N.-backed court.

“Brother No. 2” Nuon Chea, 88, was sentenced to life in prison for his role in the deaths of an estimated 1.7 million of his compatriots. His 83-year-old co-defendant, Khieu Samphan, the regime’s former head of state, also received a life sentence.

There was no discernible reaction from either defendant, both of whom are extremely frail and have vehemently denied any wrongdoing.

“The sentences that were imposed reflect the gravity of the crimes of which the accused were convicted,” international co-prosecutor Nicholas Koumjian said at a press conference after the verdict.

From seizing power in 1975, until its routing by the invading Vietnamese in 1979, the Khmer Rouge inflicted one of the worst genocides of the 20th century. Merely being literate or wearing eyeglasses marked one out as counterrevolutionary intellectual, to be subject to torture and gruesome death.

Those not killed were likely to perish from overwork, starvation, disease and neglect. All urban centers were emptied and the population forced to toil in the fields in pursuit of leader Pol Pot’s Year Zero agrarian utopia. These forced evacuations formed a major aspect of the prosecution case.

The Extraordinary Chambers in the Courts of Cambodia (ECCC), hybrid benches applying elements of both Cambodian and international law, were launched in 2006 to mete out justice. But allegations of corruption and absolutions given to senior Khmer Rouge figures now enjoying positions of authority have dogged progress.

Until Thursday’s verdict, only one conviction — that of Kaing Guek Eav, better known by his nom de guerre Comrade Duch, the former chief of the notorious S-21 prison in Phnom Penh — had been achieved, at a cost of some $200 million.

Moreover, it is unlikely that any more Khmer Rouge figures will stand trial. Pol Pot himself died in a jungle hideout while on the run in 1998, while the identities of five other possible defendants have not been officially released (even if they have been widely circulated). There is also considerable reluctance within the government of Cambodia’s strongman Prime Minister Hun Sen, himself a former Khmer Rouge battalion commander, to pursue prosecutions.

Khieu Samphan and Nuon Chea, however, must both now prepare for a second trial, this time on the specific charge of genocide, which is due to start later this year. Khieu Samphan has admitted that mass killings took place but denies any responsibility, while Nuon Chea blames the invading Vietnamese forces for killing his countrymen.

Nuon Chea’s international defense lawyer, Victor Koppe, described his client as in “very good spirits” on the morning before Thursday’s verdict, and eager to contest the new charges. “He’s very much looking forward to the second trial because, from our perspective, that is much more interesting, as we’ll be able to speak about the role of Vietnam in that period and many other issues,” Koppe said by phone.

For victims, though, there is a sense of justice being lost. Dara Duong was 4 years old when the Khmer Rouge seized power and murdered his father, grandparents, uncle and aunt.

“We wonder why they took so long” he says, about the efforts to hold the perpetrators to account. “We are not satisfied with this process.” 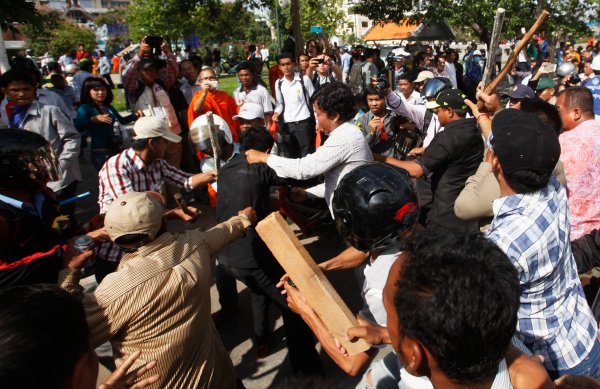 In Cambodia, Dozens of Security Guards Are Hurt in an Opposition Crackdown
Next Up: Editor's Pick