A Seychelles giant tortoise walks through its enclosure at the zoo in Duisburg, Germany, on March 31, 2014.
Roland Weihrauch—AFP/Getty Images
By Maya Rhodan

The Aspen Art Museum in Colorado plans to celebrate the grand opening of its newest building on Saturday with an exhibit featuring tortoises with iPads strapped to their backs, but an online petition hopes to stop the installation in its tracks.

“Since when is animal abuse art?” the Change.org petition reads. “We must all rise and stop this now!! There is no excuse for this!”

In the exhibit, three African Tortoises (who go by the names Big Bertha, Gracie Pink Star, and Whale Wanderer), wear iPads strapped to their shells, which flash images of Colorado “ghost towns.” The Denver Post, which reported this story earlier on Wednesday, says the animals are set to roam throughout a part of the museum during a 24-hour event on Saturday. The petition’s authors say the tortoises’ shells are sensitive to impact and they should not be forced to carry the weight of two iPads for entertainment’s sake.

The petitioners also worry the conditions of the turtles’ habitat aren’t comfortable for the animals.

“Please stop this unnecessary exploitation of animals now and do the right thing by getting these iPad of the Tortoises’ backs,” the authors write.

In a statement posted to their Facebook page, the museum argued that the exhibit was constructed with the help of a local veterinarian and the Turtle Conservancy. The use of the iPads was also cleared with the Conservancy, the museum said.

“I have worked with the staff from the Aspen Art Museum since the initial planning phase of the Cai Guo-Qiang project. Without question, the welfare of the tortoises has taken the highest priority in every stage of this exhibition,” veterinarian Dr. Elizabeth Kremzier said in a statement. “In my professional opinion, the tortoises have adapted well to their new habitat, and the iPads have not interfered in any way with their natural behavior.” 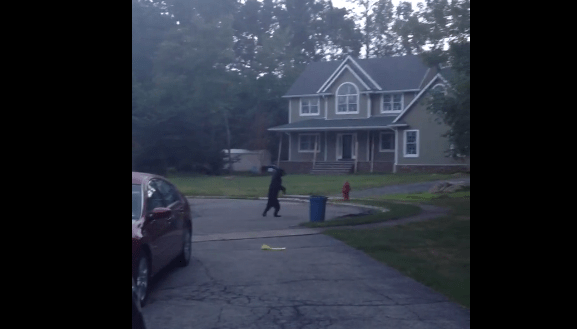 Here's a Bear Casually Strolling Around New Jersey Like It's a Person
Next Up: Editor's Pick