Palestinians walk amid the ruins of destroyed homes in the Shujayeh neighborhood, which witnesses said was heavily hit by Israeli shelling and air strikes during an Israeli offensive, east of Gaza City, Aug. 6, 2014.
Finbarr O'Reilly—Reuters
By Ilene Prusher

Parts of Gaza, even to the people who lived there only days or weeks ago, are barely recognizable. Palestinians who fled neighborhoods like Shujayeh, Beit Hanoun and Rafah are having difficulty finding where their homes once stood, says Issam Younis, director of the al-Mezan Center for Human Rights in Gaza. Those parts of the Gaza Strip — from which the Israeli military says it came under fire by Hamas militants — have seen the heaviest bombardments from Israel.

“It’s almost like a tsunami has hit the region. For some people, to know where your house is, or was, is impossible because the road isn’t even there anymore,” Younis tells TIME. He estimates only 20% to 30% of the people who evacuated their homes during the fighting, or were otherwise displaced, have livable homes to which they can return. The U.N. Relief and Works Agency says 187,000 people are living in its shelters. And only in the past 48 hours have outside agencies, like the U.N. Development Programme, been able to go out and survey the damage.

“To be honest, nobody has a clear-cut figure of what the damages are because we did not have access to these areas until Tuesday,” Younis adds. “It’s a level of unprecedented destruction that we have not been able to fully calculate yet.”

Based in the West Bank city of Ramallah, the Palestinian Authority has been trying to do just that — calculate the destruction. It has kept a running tally not just of the death toll (which now stands at 1,886) but of every building that Israeli forces have hit in the nearly four weeks of fighting, now on pause after a cease-fire agreement.

The list the PA provided Wednesday reads like a major earthquake hit Gaza: Demolished structures: 5,930. Partially demolished structures: 4,820. Damaged homes: 32,150. Damaged hospitals and health centers: 17 hospitals and 7 public-health clinics. (The Israel Defense Forces says that in at least one case, Islamic jihad rockets aimed at Israel fell short of their target and landed next to Gaza’s Shifa Hospital and the Shati Refugee Camp killing at least 10 Palestinians; the IDF has disputed other incidents which it says it’s investigating.)

Factor in the major infrastructure that has been damaged in Gaza over the past few weeks, including water and sewage systems, electricity lines and roads, and the figure for rehabilitation could total somewhere around $6 billion, according to PA Deputy Prime Minister Mohammed Mustafa. However, Dana Erekat, the PA’s head of aid management for the Ministry of Planning, says it’s too early to give an accurate estimate of rebuilding costs. The focal point person for a technical committee made up of different PA ministries, Erekat says the PA is working on an early recovery plan, then a phase of rebuilding and, finally, redevelopment.

“This is really the day after, where we’re looking at immediate needs, like finding shelter for people who are homeless and figuring out exactly how many structures were damaged,” Erekat told TIME. “A very high-level, preliminary assessment will be ready by early September.”

Rather than contracting out any of the rebuilding to international firms, Erekat added, “we’re looking at the process to be fully owned by the government.” In other words, not only is it crucial for the shattered parts of Gaza to be rebuilt, but the very process could pave the way for re-involving the PA, led by the secular Fatah faction of the Palestine Liberation Organization, in the everyday lives of Gaza residents. Officials and security forces connected to Fatah were forced from Gaza in a violent coup seven years ago organized by Hamas. The PA’s presence has been almost invisible there since — PA President Mahmoud Abbas hasn’t visited the territory since before 2007, although Fatah formed a unity government with Hamas on June 2 this year.

At a press conference Wednesday evening, Israeli Prime Minister Benjamin Netanyahu said Israel was “cooperating with the Palestinian Authority … and [we] are prepared to see a role for them [in Gaza].”

A Palestinian sits on a salvaged sofa outside his destroyed home in the Shujayeh neighborhood, east of Gaza City, Aug. 6, 2014.
Oliver Weiken—EPA

While cease-fire talks in Cairo continue, the parties announced late Wednesday that they had agreed to extend an ongoing but temporary truce for an additional 72 hours, meaning it would expire next Monday. People on both sides of the conflict seem more than relieved. For Israelis, the truce has brought a sense of calm after almost a month of running for shelter from the nearly 2,700 rockets and mortars launched from Gaza since July 8. And for the Israeli government, the damages and compensation costs of Operation Protective Edge are likely to add up about $2 billion, the Haaretz newspaper reported, quoting an Israeli tax authority official. Israel also lost 64 soldiers in the fighting, as well as three civilians to rocket attacks.

For Gazans, however, life has changed radically and perhaps irreversibly, even for those whose homes are almost intact. Younis, for example, says he’s had one hour of electricity in the last three days. No electricity means no plumbing and no elevator, so he needs to carry jugs of water up the stairs to his fifth-floor apartment — water that he’s not even sure is clean enough to drink. When he manages to buy some diesel fuel, he powers up a small generator, which his family can use to watch television news.

“No electricity means we don’t use the refrigerator, so we must go out and buy our food day by day, and must wash our clothes by hand because there’s no electricity for the washer,” Younis says.

Younis’ three youngest children, ages 12 to 17, have ceased being regular teens. They will only sleep in the room with their parents.

“They’re scared. They ask when will we be bombarded again,” Younis says. “I’m trying to make them secure, but it’s difficult. All of Gaza is in post-trauma now.”

The biggest fear of all: not knowing whether it’s really over. 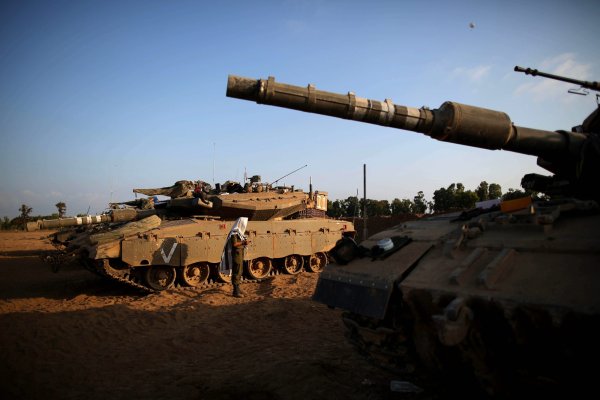