In Defense of Johns

As a man who has spent an embarrassing amount of money on prostitutes and various other sexual encounters, I was excited when I heard about a “National Day of Johns,” because I thought I was being honored.

I envisioned myself being carted down New York City’s Fifth Avenue on the back of a flatbed truck, waving to cheering fans as confetti rained down on me and my disappointed parents hid behind a mailbox. A silly (yet understandable) mistake on my part, as the National Day of Johns was a celebration of the arrests of hundreds of men in a series of sex stings in 15 states. The fact that I’ve never been arrested in one of these stings should convince even the most ardent of atheists that miracles are indeed possible.

I suppose you could say I am the consummate john. I’m loyal, I’m dedicated, and I will always come back — even as it seems as though efforts to shame johns are on a national upswing throughout the country.

I cannot even fathom a guess as to how much money — let alone time — I’ve spent on paid sex in the past 25 years. Although I can tell you that when Charlie Sheen confessed he’d spent $50,000 in one year, I nodded my head and saw it as an achievable goal. Because I’ve never actually tallied the dollar amount of my sex addiction, my therapist tells me I should — her logic being that a concrete cost would make it more definitive and its consequences more tangible.

But really, perhaps the most shameful thing I can admit is this: I’m not really ashamed. And neither should any of these other (unmarried) johns who have been arrested.

If these men are anything like me, they might simply feel more comfortable with prostitutes. I never pick them up to be abusive. I always feel extraordinarily loving and close to them. When I first began soliciting sex for money, it never occurred to me that some of them are possibly forced into prostitution or have abusive pimps. I must have known it deep down on an intellectual level but hadn’t witnessed anything to confirm it.

The only experience I’ve had where an element of violence was present was driving on 48th Street in New York and talking to a girl through my passenger window. (A big part of my addiction is the ritualistic aspect, and for some reason I only liked to pick up prostitutes who talked to me through the passenger window.) As we were speaking, a van full of girls stopped, and a guy I assume was her pimp bounced her across the hood of my car and threw her in the van.

This is why I’m a firm believer that prostitution should be legalized and pimps should be thrown down an elevator shaft.

Law-enforcement stings designed to shame men who pay for sex are nothing more than the state blowing its own morality horn. Being a comedian who is single allows me a luxury most johns don’t have, which is the freedom to discuss the topic openly. And not from a case-study point of view but from the honest point of view of someone who has spent the equivalent of a Harvard Law School education on purchasing sex.

By keeping prostitution illegal because we find it morally objectionable, we allow (or, more accurately, you allow) sex workers to constantly be put into dangerous situations. Studies have shown that rapes and STDs dropped drastically from 2003 to 2009 in Rhode Island after the state accidentally legalized it. The American Journal of Epidemiology showed that the homicide rate for prostitutes is 50 times that for those in the next most dangerous job for a woman, working in a liquor store. You don’t need a master’s in sociology to understand it would be much safer for sex workers if they were permitted to work in places that provided adequate security. Legalizing prostitution would also alleviate the fear a sex worker may have about reporting a john’s abusive behavior because of the risk of arrest.

The illegal aspect of prostitution has never deterred me, nor would legalizing it cause me to engage in it more.

The decision people make to have sex for a living would undoubtedly confuse and repulse a large part of the population. But in a free society, people must be allowed to make choices for themselves that are incomprehensible to others. By keeping prostitution illegal and demonizing all of its parties, we (you) are empowering pimps and human traffickers and anyone else who wants to victimize sex workers because they feel helpless under the law.

Give sex workers rights. Give johns a break.

Norton is a comedian, New York Times best-selling author and host of The Jim Norton Show on Vice.com 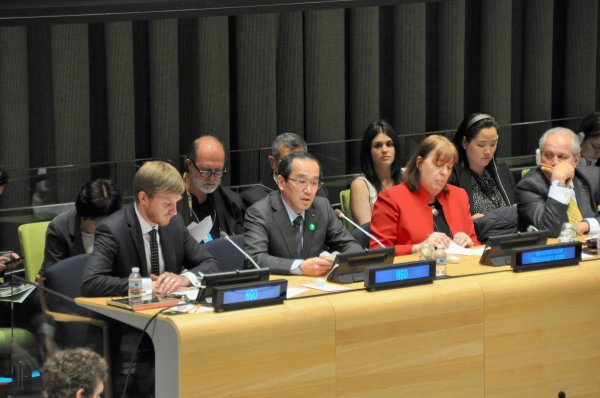 Why We Must Disarm the U.S.'s Unprecedented Nuclear Arsenal
Next Up: Editor's Pick